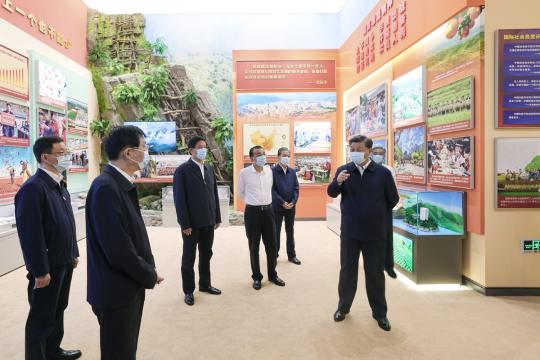 The exhibition — Forging Ahead in the New Era — opened on Tuesday morning at the Beijing Exhibition Hall. It includes more than 6,000 photographs, materials and models showcasing China's achievements in a wide range of fields, including independent technological innovation, fighting poverty and the COVID-19 pandemic, and progress in the country's integrated development.

The exhibition is being held to guide all officials and the public to continue to forge ahead under the leadership of the CPC Central Committee with General Secretary Xi at its core, remain committed to the leadership of the CPC and China's socialist system, and resolutely follow the CPC in sticking to the path of socialism with Chinese characteristics and promoting national rejuvenation through a Chinese path to modernization.

Wang Huning also said that the fundamental reason why historic achievements and historic shifts have been made in the cause of the Party and the country is the helmsmanship and leadership of General Secretary Xi and the sound guidance of Xi Jinping Thought on Socialism with Chinese Characteristics for a New Era.

Wang stressed the need to maintain a high degree of unity with the CPC Central Committee with Comrade Xi Jinping at its core.