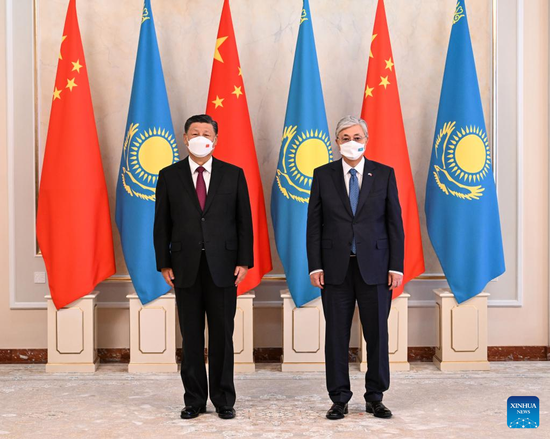 Chinese President Xi Jinping and Kazakh President Kassym-Jomart Tokayev pose for a photo before their formal talks, Sept. 14, 2022. Xi arrived in Nur-Sultan Wednesday afternoon and began his state visit to the Republic of Kazakhstan. (Xinhua/Rao Aimin)

Chinese President Xi Jinping arrived in Nur-Sultan Wednesday afternoon and began his state visit to the Republic of Kazakhstan.

Xi was warmly received by Kazakh President Kassym-Jomart Tokayev accompanied by senior Kazakh officials including Deputy Prime Minister and Foreign Minister Mukhtar Tileuberdi and Mayor of Nur-Sultan Altai Kulginov at the airport. Some 70 ceremonial guards stood in two ranks saluting the leaders as the military band played a fanfare. Two beautifully dressed Kazakh girls, with flowers in their hands, welcomed the arrival of Xi.

He pointed out that China and Kazakhstan, connected by mountains and rivers, are good neighbors, good friends and good partners with a shared future, adding that over the past 30 years since the establishment of diplomatic ties, China-Kazakhstan relations have progressed by leaps and bounds and reached the high level of permanent comprehensive strategic partnership.

He noted that, during the visit, he will hold talks with Tokayev to jointly chart a new blueprint for all-round China-Kazakhstan cooperation. He also expressed his confidence that this visit will inject fresh and strong impetus into the common development and prosperity of both countries.

Chinese Ambassador to Kazakhstan Zhang Xiao also came to the airport to receive the delegation.

The golden autumn brought fair winds and wispy clouds to the city of Nur-Sultan. On the flagpoles lining the streets, five-starred red flags were flying high. Accompanied by a motorcycle escort, the state guest motorcade of Xi arrived at the Ak Orda Presidential Palace. He was warmly received by Tokayev as he exited the car. The two heads of state then proceeded together to the main hall of the Presidential Palace.

Tokayev held a grand welcome ceremony for Xi. The two heads of state jointly stood on the podium as the military band played the national anthems of China and Kazakhstan. Accompanied by Tokayev, Xi inspected the honor guard.

After the welcome ceremony, Tokayev invited Xi to an art exhibition titled "Kazakhstan-China: A Dialogue Across Millennium. On display were Chinese and Kazakh art treasures from the State Museum of Arts of the Republic of Kazakhstan. The exquisite Chinese paintings and porcelains and the Kazakh silks and ceramics are vivid testaments to the mutual learning between the splendid Chinese and Kazakh civilizations over the millennium. They also bear historical witness to the friendly exchanges between generations of Chinese and Kazakh people.

Xi pointed out that over the past three decades since China and Kazakhstan established diplomatic ties, the bilateral relationship has stood the test of the changing international landscape, achieving greater substance, higher levels and more fruitful outcomes.

The two countries have created many "firsts" in their relations, including the first in settling the boundary question, the first in laying cross-border oil and gas pipelines, the first in conducting international production capacity cooperation and the first in building a permanent comprehensive strategic partnership, Xi said.

China highly values its relations with Kazakhstan, and firmly supports Kazakhstan in safeguarding national independence, sovereignty and territorial integrity, and in taking reform measures to preserve national stability and development, Xi said, adding that China will always be a trustworthy and reliable friend and partner of Kazakhstan.

China is ready to work with Kazakhstan in firmly supporting each other's development and rejuvenation, and helping each other achieve development and prosperity. The unbreakable friendship between China and Kazakhstan will contribute to the growth of positive and progressive forces in the world and to the building of a community with a shared future for mankind, Xi said.

Xi stressed that China-Kazakhstan cooperation enjoys a solid foundation, huge potential and broad prospects, adding that the two sides should make good use of the existing mechanisms such as the regular Prime Ministers' Meetings and the China-Kazakhstan Cooperation Committee to synergize development strategies, leverage each other's comparative strengths and bring bilateral cooperation to a new scale and new level.

It is important that the two sides work together for high-quality Belt and Road cooperation, boost cooperation in areas such as economy and trade, production capacity, connectivity and COVID-19 response, and expand innovation cooperation in such fields as big data, artificial intelligence, digital finance, cross-border e-commerce, green energy and green infrastructure, Xi said, adding that the two sides need to forge closer people-to-people ties and promote friendly exchanges and mutual understanding between their peoples.

The two sides need to enhance cooperation within multilateral frameworks such as the Shanghai Cooperation Organization (SCO), the Conference on Interaction and Confidence Building Measures in Asia (CICA) and China Central Asia, and jointly support efforts for a successful SCO Samarkand Summit, in order to inject new impetus into the Organization's future development. The two sides should also step up international coordination, practice true multilateralism and contribute their shares to building a more just and equitable global governance system, he added.

Tokayev expressed warm congratulations to China on its great development achievements under the leadership of Xi, and wished the 20th National Congress of the Communist Party of China a full success.

Tokayev said the fact that Xi chooses to visit Kazakhstan on his first overseas trip since the onset of the COVID-19 pandemic, and on the occasion of the 30th anniversary of China-Kazakhstan diplomatic relations, fully reflects the high degree of mutual trust between the two countries and the high-level nature of the Kazakhstan-China permanent comprehensive strategic partnership.

The two sides will sign a joint statement to demonstrate their firm commitment to another golden 30 years of Kazakhstan-China relations, which is of special and great significance in the current volatile and complex international environment, Tokayev noted, adding that it is believed that Xi's visit will mark a new milestone in the history of Kazakhstan-China relations and bring new substance and impetus to the growth of the permanent comprehensive strategic partnership between the two countries.

Kazakhstan will continue to firmly uphold the one-China policy and be a good partner and good friend that China can always rely on under all circumstances, Tokayev said.

Noting that next year will mark the tenth anniversary of the Belt and Road Initiative (BRI) proposed by Xi, Tokayev said that the BRI has become an important engine driving the building of a community with a shared future for mankind, and Kazakhstan will continue to actively support and participate in the BRI.

Tokayev expressed appreciation to China for the valuable support Kazakhstan had received in its battle against COVID-19 and pursuit of economic development, adding that Kazakhstan hopes to better synergize development strategies with China, intensify exchanges at various levels, and deepen cooperation across the board including in economy and trade, infrastructure, energy, manufacturing, science and technology, tourism and people-to-people engagements.

Kazakhstan stands ready to work with China to implement the Global Development Initiative and Global Security Initiative, enhance coordination and collaboration within frameworks such as the SCO, CICA and China Central Asia, and jointly safeguard security and stability in the region and promote common development, Tokayev said.

The two heads of state signed and issued the Joint Statement Between the People's Republic of China and the Republic of Kazakhstan on the 30th Anniversary of the Establishment of Diplomatic Relations, and announced that China and Kazakhstan will work for the goal and vision of building a community with a shared future defined by lasting friendship, a high degree of mutual trust and sharing weal and woe.

Relevant departments of the two sides signed bilateral cooperation documents in such areas as economy and trade, connectivity, finance, water conservancy and the media. The two sides decided to set up consulates general in China's Xi'an and Aktobe in Kazakhstan respectively.

After the talks, Xi attended the welcoming banquet hosted by Tokayev, and the two leaders had an in-depth exchange of views on issues of shared interest.

After the banquet, Xi concluded his state visit to Kazakhstan and left Nur-Sultan for Samarkand. He was seen off at the airport by Tokayev and other senior Kazakh officials.

Tokayev said that Xi's visit, albeit a short one, is highly productive and fruitful, adding that the two leaders reached much important consensus, which will steer Kazakhstan-China relations to an even higher level.

Xi pointed out that his visit is a new starting point for bilateral relations and believed that with the joint efforts of the two sides, China-Kazakhstan relations will enjoy greater development in the future.

The two heads of state agreed to keep in close contact through various means.