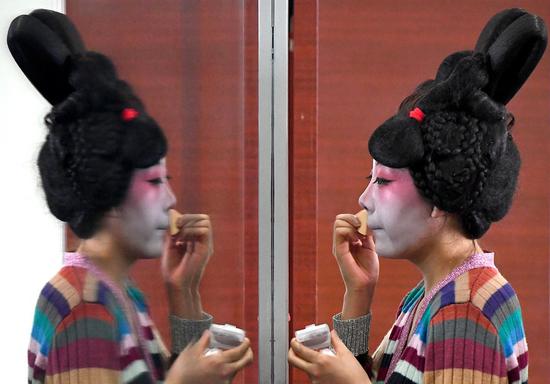 Chinese researchers have discovered the earliest known residues of synthesized lead white cosmetics in the world in a new archaeological study in northwest China's Shaanxi Province.

The findings of the study conducted by the University of Chinese Academy of Sciences (UCAS) and Shaanxi Academy of Archaeology were published recently in the journal Humanities and Social Sciences Communications.

Lead white is one of the most important pigments in human history, and its synthesis has promoted the development of art and cosmetics, according to the study.

The researchers investigated some white cosmetic residues from a set of bronze wares, which were excavated in a tomb from the Liangdai Village site dating back to the 8th century BC, through FTIR, XRD, SEM-EDS, radioactive and stable carbon isotope analyses.

The results indicated that the ancient Chinese have been using synthesized lead white cosmetics in the early Spring and Autumn Period (770-476 BC), several hundred years earlier than that in ancient Greece, noted Han Bin, the lead researcher and a special research assistant at the UCAS.

Han pointed out that there are different views on the origin of synthetic lead white in China among international researchers, and some believe that the technology in China was not of local origin and may have been introduced from Europe or ancient Egypt.

The research revealed that the synthesized lead white found in northwest China was produced by the precipitation method rather than the corrosion method practiced in ancient Greece.

Both regions have different approaches for synthesis, indicating the independent origins and development of lead white synthesis, Han said.

According to the research, the mass production of synthetic lead white at a lower cost promoted the widespread use of white makeup in China and the Mediterranean world, which triggered a "cosmetic revolution."

The latest discovery proves that since the early Spring and Autumn Period in China, people had been pursuing skin whitening, said Yang Yimin, a professor at the UCAS.

"The pursuit of beauty stimulated the development of chemistry in human history," he added.