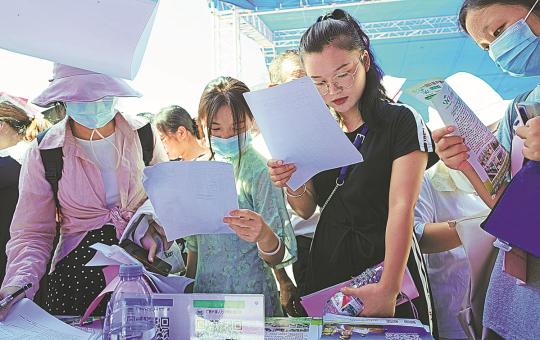 China's overall unemployment rate continued to drop last month, but remained higher than the same period last year and the numbers of unemployed among the young were of particular concern, an official said on Monday.

Fu Linghui, spokesman for the National Bureau of Statistics, said that the surveyed urban unemployment rate stood at 5.4 percent in July, down by 0.1 of a percentage point from the previous month.

A total of 7.83 million new urban jobs were created between January and July, he said during a news conference held by the State Council Information Office.

The surveyed urban unemployment rate among those aged 25 to 59－the majority of the labor market－went down by 0.2 percentage points to 4.3 percent in July.

"The rate is nearing that of the same period of last year, signifying that the overall job market is stable," he said.

For rural migrant workers, the surveyed unemployment rate was 5.1 percent in July, down by 0.2 percentage points from the previous month.

Fu said the continuing downward trend can be attributed to measures targeted at helping migrant workers find jobs and quick recovery of the economy following COVID-19 outbreaks in April.

"With an easing epidemic situation, the surveyed unemployment rate in 31 major cities was 5.6 percent in July, down by 0.2 percentage points from June," he added.

However, employment pressure on young people continued to rise last month, with the surveyed unemployment rate in July for people aged 16 to 24 growing by 0.6 percentage points to 19.9 percent.

"July is graduation season, and the large number of new graduates entering the job market increased the unemployment rate," he said.

"Enterprises, especially those in the service sector that cater to many young people, were hit by domestic outbreaks, and thus encountered difficulties and were unable to provide more job positions."

He added that the preference among young job seekers for stable positions has also created a chasm between expectations and reality, further impacting the unemployment rate.

Even as China tries to overcome the negative impacts of domestic COVID-19 outbreaks, Fu reassured that the urban unemployment had peaked and is expected to further reduce and stabilize in the future.

"The pressure on the labor market is still great, and we will continue to implement a variety of measures to stabilize employment," he said.