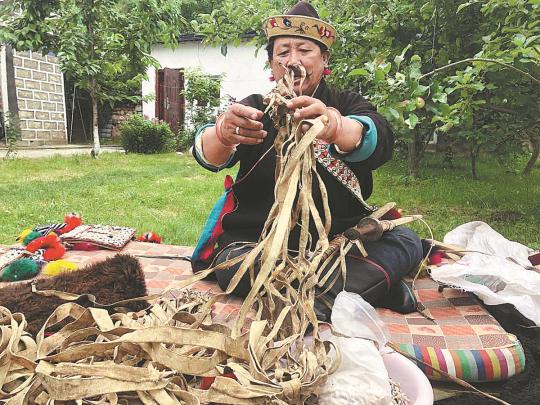 Dargye makes ropes from the hides of animals at his home in Dragyib district in Nyingchi, Tibet autonomous region. (Photo/China Daily)

"The arrow shot is so straight that it hits the bull's-eye, the young people will have good luck, and sitting on the lawn of the archery field is as comfortable as sitting on soft silk," Dargye sang as he worked on his handmade bag.

Dargye, 56, is an artist who excels at traditional craftsmanship and Tibetan folk music in Drinba village in Dragyib district, Nyingchi, Tibet autonomous region. The village is famous for its beautiful peach flowers and rich ethnic culture. He remembers many folk songs he learned from his father and uncle. Now, it's his turn to pass them on.

The song topics vary. The general themes are archery, herding, love, labor and praise for the land. Dargye's favorite songs are about archery and herding, which play key roles in his life. When Drinba villagers herd their yaks and cows in their summer pasture, they always sing folk songs.

"When we hold archery competitions in the village, men compete in the field and women offer delicacies and highland barley wine to the participants. We sing archery songs," he said.

In addition to teaching these songs to his family members and apprentices by inviting them to his home, he also uses social media platforms such as WeChat to teach songs.

His daughter, Chok Butri, also admires the folk culture. After she posted a video of her daughter, Tsering Kyi, dancing on Douyin, she gained a lot of new fans on the popular short-video platform. "We are modern people living in a modern era, so it's important that we use modern tools to pass on our traditional culture to make it last forever. It's our responsibility," said Chok Butri, adding that she and her father often post songs and dances on WeChat and Douyin.

Dargye and his fellow villagers also recreate songs, adding modern elements such as aircraft and trains to the lyrics.

Besides singing and dancing, Dargye makes handicrafts. His products include various hide and hair ropes, bags made of leather and cloth, and knife sheaths. Most of them are decorated with Tibetan cultural elements, and each element has a meaning.

Dargye is also an expert at producing ropes made from the hides of animals. Residents from other villages often come to buy such ropes from him, which are widely used to make harnesses for horses.

The local government encourages villagers to inherit and develop folk songs and other forms of traditional culture. Dargye's efforts to preserve folk culture have been acknowledged by the government. In 2014, he was chosen as a county-level intangible cultural inheritor and receives subsidies every year.