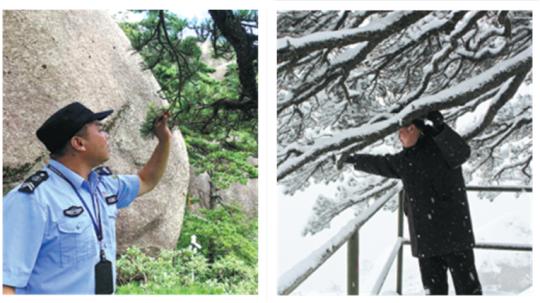 Left: Hu Xiaochun checks the Guest-greeting Pine's health during a patrol on Yellow Mountain in Anhui province. Right: Hu takes care of the pine tree in the winter. (Photos provided to China Daily)

President Xi Jinping has replied with a letter to two grassroots model workers from a scenic spot in Anhui province, encouraging them to influence more people with their "positive energy".

Xi, who is also general secretary of the Communist Party of China Central Committee and chairman of the Central Military Commission, wrote back on Saturday to Li Peisheng and Hu Xiaochun, both known as "Good Samaritans of China" — a title honoring the ordinary people who perform extraordinarily in their work. 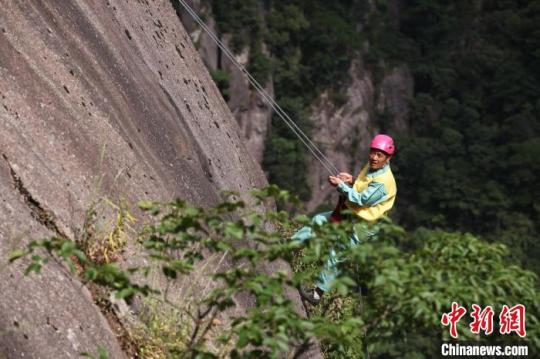 His reply letter came as Li, a sanitation worker in the Huangshan Mountain Scenic Area, and Hu, guardian of the 10-meter-tall, 1,300-year-old "Guest-Greeting Pine", one of the landmarks in the scenic area, wrote to him recently.

In the letter, they expressed to him their strong resolve to make contributions in guarding the beautiful Huangshan Mountain and in building a beautiful China.

In his letter of reply, Xi praised them for their longtime and dedicated efforts in keeping the mountain clean and tending the time-honored pine tree, which has become a symbol of welcome to guests.

Those who are known as "Good Samaritans of China" stand out due to their extraordinary achievements in their ordinary work, Xi said.

He encouraged Li and Hu to continue to play an exemplary role, actively pass on the positive energy to more people, carry on the core socialist values and strive to be good citizens, outstanding workers and loving members of their families.

Xi also expressed his hope that they would make more contributions to the great rejuvenation of the Chinese nation.

China has been awarding grassroots heroes as "Good Samaritans of China" since 2008. Li and Hu joined the list of awardees in 2012 and 2021 respectively.