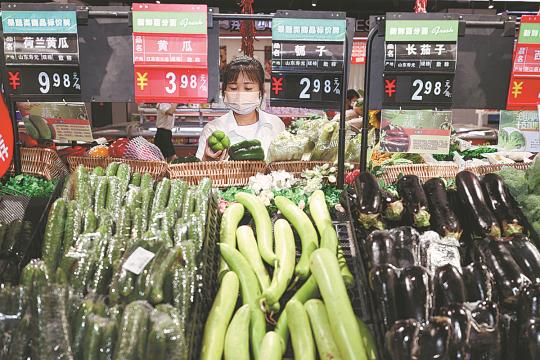 China will likely keep its monetary policy stable and on target in the second half as consumer inflation is expected to rise mildly within a reasonable range in the rest of the year, experts said.

Their comments came as China's consumer inflation accelerated to the highest level in two years, largely driven by surging pork prices, but it still managed to come in weaker than expected in July.

China's consumer price index, a main gauge of inflation, rose 2.7 percent year-on-year in July, following a 2.5 percent rise in the previous month, the National Bureau of Statistics said on Wednesday.

The growth in core CPI, which excludes volatile food and energy prices and is deemed as a better gauge of the supply-demand relationship in the economy, came in at 0.8 percent year-on-year in July, following a 1 percent rise the previous month.

Zheng Houcheng, director of the Yingda Securities Research Institute, said the rise in July CPI was largely due to soaring pork prices as some producers were reluctant to sell hogs ready for the market.

Looking ahead, Zheng expects consumer prices may fluctuate in August, and the rise in CPI may struggle to surpass 3 percent year-on-year during the month.

Compared with soaring prices in other major economies, China's overall price levels are generally stable. Inflation hit a 40-year high in June in the United States, as the consumer price index rose 9.1 percent year-on-year, said the US Department of Labor.

Tommy Wu, lead economist at Oxford Economics, a think tank, said the spillover effect of rising global food prices on China's domestic food costs will also likely be modest, given China's self-sufficiency in staple grains in the near term.

With limited pass-through of factory-gate inflation and energy prices on consumer prices and subdued core inflation due to weak domestic demand, Wu said his team expects China's consumer inflation to remain below the 3 percent target for 2022.

Against such a backdrop, he said monetary easing will remain targeted to support credit to small and medium-sized enterprises, manufacturing, real estate and infrastructure financing.

A report released on Wednesday by the People's Bank of China said China may face mounting inflationary pressure at home due to factors including a recovery in consumer demand, rising pork prices and high energy and raw material costs, and imported inflationary pressures will continue to exist.

Looking into the second half, the nation's central bank said China's consumer inflation will rise at a faster pace than the level in the first half, and the CPI rise may exceed 3 percent in some months.

According to the report, China will continue to keep prudent monetary policy and refrain from adopting a deluge of strong stimulus policies. And it will keep an eye on the inflation situation both at home and abroad.

For instance, NBS data showed prices of plane tickets, hotel accommodations and tourism increased by 6.1 percent, 5 percent and 3.5 percent, respectively, in July on a monthly basis.

Even though China is facing inflationary pressure from soaring pork prices in the coming months, Wen said the government's recent moves to stabilize supplies and prices will help ensure market orderliness.

As for the rest of the year, he said his team expects the CPI to rise modestly and the producer price index to continue to trend down, which will not put extra pressure on monetary policy easing.

According to the NBS, China's PPI, which gauges factory-gate prices, increased 4.2 percent year-on-year in July after a 6.1 percent rise in June, cooling to the lowest level since February 2021. On a monthly basis, the PPI declined 1.3 percent in July.

Yin Yue, a macroeconomics analyst at Shanghai-listed Hongta Securities, agreed that inflation will not put much pressure on China's monetary easing, especially considering the relatively low core CPI level and the slowdown in PPI growth.

Looking ahead, Feng Mohan, a macroeconomics researcher at Beijing FOST Economic Consulting Co Ltd, said he will not rule out the possibility that the PPI will decline in the second half amid weakening global demand, a gloomy global outlook and a high base effect from the previous year.