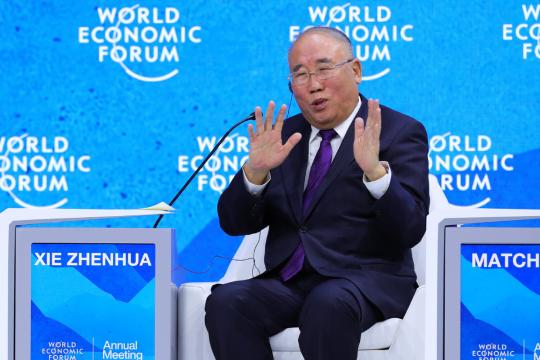 China offers support to other developing nations, forges ahead with carbon goals

Despite suspending climate talks with the United States, China has always been a proactive contributor to the global climate process by persistently supporting other developing countries in dealing with the issue, said Xie Zhenhua, China's special envoy for climate change.

The U.S. is fully responsible for the current situation in China-U.S. climate cooperation, Xie stressed in an exclusive interview with China Daily.

The special envoy made the remarks following comments by his U.S. counterpart, John Kerry, that China's decision to suspend climate talks, which is one of eight countermeasures China's Foreign Ministry announced on Friday in response to the visit of U.S. House Speaker Nancy Pelosi to Taiwan, is "disappointing".

Kerry was secretary of state under the administration of former president Barack Obama when China-U.S. cooperation on climate issues went through a honeymoon period. The two countries played key roles in helping the world reach the landmark 2015 Paris Agreement on climate change.

Xie noted the outstanding climate cooperation between the two nations since last year before Pelosi's visit.

"Previously, exchanges between climate envoys of the two nations were smooth with remarkable results," he said.

Last year, the two economies issued two joint statements on coping with the global crisis of climate change, Xie said. The documents were to enter implementation phase when the Pelosi visit that infringed on China's sovereignty and territorial integrity happened, forcing China to suspend the climate talks.

China hasn't punished the world and developing countries. Instead, the U.S. has, Xie stressed.

The Kyoto Protocol, the first major global agreement on the reduction of carbon dioxide emissions, was signed in 1997. The U.S. repudiated the protocol in 2001, he said.

In 2020, the world's largest economy also withdrew from the Paris Agreement. Despite the U.S. rejoining the 2015 treaty last year, it has greatly undermined the motivation to tackle climate change around the world, Xie said.

Xie also pointed out that the U.S. is historically responsible for more emissions than any other country. The U.S. and other developed countries have yet to honor their pledge to mobilize $100 billion per year by 2020 for climate action in developing countries.

The U.S. imposed sanctions on some Chinese photovoltaic enterprises over the so-called "forced labor" issue in the Xinjiang Uygur autonomous region in 2021, he said. The act has not only undermined the cooperative atmosphere between China and the U.S., but has hindered renewable energy development around the world.

Xie urged the U.S. to take solid actions in tackling climate change instead of paying lip service to it.

In stark contrast, China has always been a major contributor to the global climate process and made active efforts to implement international treaties on climate change, he emphasized.

Under these treaties, he said, China has close communication and coordination with the U.S., the European Union, a group called the BASIC countries and the Group of 77 to promote the multilateral climate process. BASIC is a group of four large newly industrialized countries－Brazil, South Africa, India and China.

China has offered support for the climate endeavors of other developing countries under the South-South Cooperation mechanism to the best of its ability, he added.

While making all-out efforts to carry out climate cooperation with other countries, China has also been resolutely forging ahead with its climate targets of peaking carbon dioxide emissions before 2030 and realizing carbon neutrality before 2060, he said.

China has essentially completed a policy system to achieve those goals, he said.

Aside from an overarching guideline for those targets and an action plan from the central authorities for peaking emissions, the country has worked out implementation plans for the energy, industry, building and transportation sectors, among others, and rolled out measures supporting technology, taxes, finance and carbon sinks.