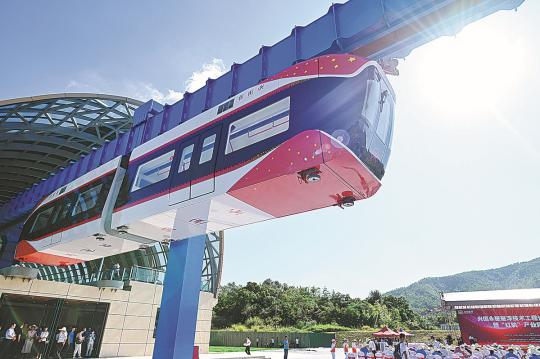 The Xingguo train does not rely on rubber wheels for load-bearing runs. Instead, it uses attraction and repulsion in a magnetic field created within tracks to propel itself while being suspended in air with zero friction.

According to the China Railway Liuyuan Group, Xingguo is the first of its kind in China to adopt permanent magnetic levitation technology.

Xingguo is a trial project of the Red Rail program and is being co-developed by the Jiangxi University of Science and Technology, China Railway Liuyuan Group Co Ltd and China Railway Hi-Tech Industry Co Ltd.

Xingguo marks China's latest attempt to use cutting-edge technologies to transform the domestic railway industry. Maglev refers to magnetic levitation, the principle applied by certain railroad systems that use magnets to float trains above the tracks.

Xingguo's trials are done on an 800-meter track. The train can carry up to 88 people and achieve a top speed of up to 80 kilometers per hour.