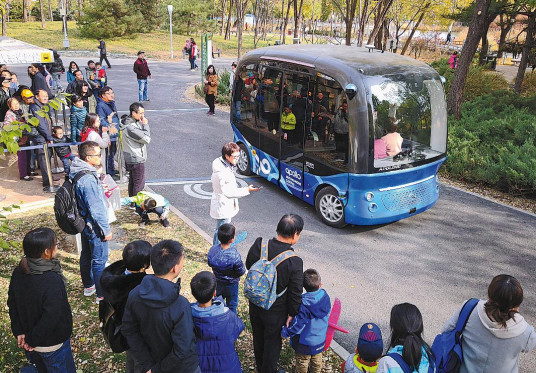 China has released the first national draft guideline on the use of self-driving vehicles for public transport, a key move in accelerating the large-scale commercialization of autonomous driving technology and encouraging local authorities to formulate the relevant management policies, industry experts said.

The country will encourage the use of self-driving vehicles such as buses in an enclosed Bus Rapid Transit or BRT system, and allow autonomous vehicles to offer taxi services under simple and relatively controllable scenarios, according to draft rules published by the Ministry of Transport on Monday. The authorities are asking for public opinion or reactions to the guideline through Sept 7.

"The national draft rules on self-driving vehicles are expected to better regulate the whole industry, providing a reference and guidance for local authorities that have yet to issue similar guidelines," said Zhang Xiang, a researcher at the Automobile Industry Innovation Research Center at North China University of Technology in Beijing.

The draft guideline also stipulates that the routes of autonomous vehicles should be far away from densely populated areas such as schools, hospitals and large shopping malls.

Apollo Go, the name of Baidu's autonomous ride-hailing service, is authorized to charge fares for robotaxi services completely without human drivers and safety supervisors in the car in designated areas.

Noting that China has taken the lead in the research and development as well as application of autonomous driving technologies, Zhang said the latest move will encourage self-driving companies to carry out road tests and commercial operations of robotaxi services in more cities, speeding up the large-scale commercial use of autonomous vehicles across the nation.

Some local governments have already rolled out a series of supportive policies to promote the commercialization of autonomous driving technology.

For instance, the southern Chinese metropolis of Shenzhen has allowed fully autonomous vehicles without human drivers to run on certain roads since Aug 1, when a local regulation on smart and internet-connected vehicles came into effect.

In July, Beijing launched China's first pilot area for commercial autonomous driving vehicle services. Baidu and self-driving startup Pony.ai are the first enterprises granted permission, and they will offer paid robotaxi services, without a safety operator behind the steering wheel, within a 60-square-kilometer area in Yizhuang, a southern suburb of Beijing.

However, a supervisor will still sit in the front passenger seat to ensure safety.

"Currently, only a few countries, including China and Germany, have rolled out policies at the national level that support the development of autonomous vehicles," said Lyu Jinghong, an intelligent-mobility analyst at research firm BloombergNEF.

Lyu added that clear regulations at the national level will encourage local governments and autonomous driving companies to speed up the application of self-driving technology, which is crucial to achieving the commercialization target.