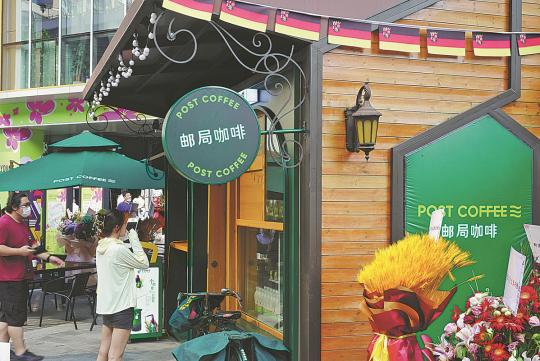 The coffee house is decorated in China Post's classic green color scheme and features iconic postal items such as postboxes. In addition to coffee, it offers tea, bread and branded merchandise.

"I love the cafe's retro designs and its nice latte," a netizen said on Xiaohongshu, a lifestyle-focused social networking site.

Dong Kexin, chief marketing officer of Post Coffee, said they will open more outlets in Beijing in the near future. The long-term plan is to expand operations based on the vast postal network around the country.

In February, the first Post Coffee shop was revealed in a renovated post office in Xiamen, Fujian province.

"The post office will no longer be a simple place for postal services. It's more about a social setting where people can try premium coffee drinks and experience postal culture. We would like to build a new post office image that is associated with fun, fashion and diversity," Post Coffee said in a statement on its official Weibo account.

Wen Zhihong, an expert in chain businesses, said China Post has clear advantages in its huge number of post offices and cultural significance. But it faces challenges in chain store management as a newcomer to the industry.

China Post is just one of the non-beverage businesses to set foot in the booming coffee industry. According to iiMedia Research, a Guangzhou-based data analysis agency, China's coffee market was valued at 381.7 billion yuan ($56.57 billion) in 2021 and is forecast to hit 1 trillion yuan in 2025.

Domestic sportswear giant Li-Ning has launched a freshly brewed coffee service in some of its outlets and has applied to register its brand as Ning Coffee. It is a new attempt that aims to enhance customers' shopping experiences, according to Li-Ning, which owns more than 7,000 stores nationwide.

Hu Lu, vice-chairman of the Coffee Association of Yunnan, said that the domestic coffee industry is growing at a fast pace, driven by demand from young consumers.

For non-beverage enterprises entering the coffee market, what they really desire is not additional revenue but a closer connection with the post-1990 and-2000 generations, Hu said.

"The beverage business serves as an instrument here, helping them earn more recognition and acceptance from young people," he added.

Industrial titans are also bullish about the prospects and make efforts to expand their presence.

In March, Canadian coffee group Tim Hortons' China branch announced it had received an investment of 1.2 billion yuan. The investment will fuel its business plan over the next five years, which is to increase its current 410 stores in the country to 2,750 stores by 2026, according to the group.