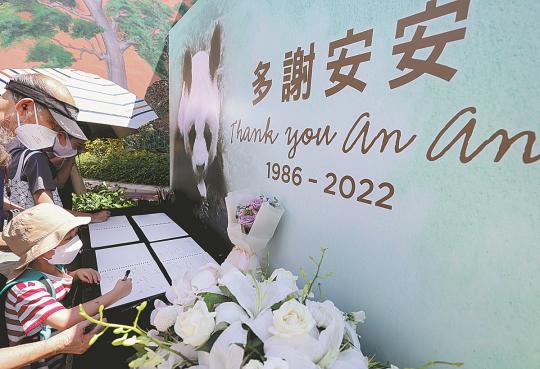 Visitors pay tribute to giant panda An An at Hong Kong Ocean Park on Thursday. (Photo by CALVIN NG/CHINA DAILY)

With cartoon portraits, flowers and numerous group photos posted online, people in Hong Kong have expressed their deep condolences and fond memories of An An, the world's longest-living male giant panda under human care, who was also a gift from the nation.

The panda, who arrived at Hong Kong Ocean Park in March 1999, passed away at the age of 35, the equivalent of 105 in human years, on Thursday morning after his health took a turn for the worse.

He came to the city alongside Jia Jia, the world's longest-living female giant panda, who passed away in 2016 at the age of 38. They were given to Hong Kong by the central government to mark Hong Kong's second anniversary of returning to the motherland.

On Thursday, many residents brought their children to the park to mourn An An. The park set up a counter with a giant placard reading "Thank you, An An", for visitors to pay their respects and make their tributes. Two girls drew cartoon portraits of An An in the condolence book and wrote: "Best panda ever! We love you!"

The park also put a condolence card with An An's photo on it and a bunch of flowers at his enclosure in the park. Many people also visited there to take photos.

Nearly a thousand comments were left on a social media post from the park, with netizens posting pictures taken with An An.

In a news release on Thursday, Ocean Park said that after weeks of declining food intake and activity levels, veterinarians from Ocean Park and the Agriculture, Fisheries and Conservation Department decided to humanely euthanize the panda in its enclosure.

"We are truly thankful for the opportunity to take care of Jia Jia and An An throughout the years so that the Park could develop into an important base for panda conservation. Since this long-living panda duo's arrival at Ocean Park in 1999, they have supported the park's endeavors in promoting nature and ecosystems to visitors as its ambassadors," said Paolo Pong, chairman of Ocean Park Corporation.

"An An was an indispensable member of our family," Pong said.

"His legacy will remain as the best testimony to the park's ongoing commitment to providing best-in-class husbandry and medical care for giant pandas, with the China Conservation and Research Center for the Giant Panda as an essential partner."

In mid-July, the park announced that An An had a poor appetite and been out of spirits, unable to see park visitors.

The city now only has two giant pandas－Ying Ying and Le Le－who were gifted to Hong Kong by the nation in 2007 to mark the 10th anniversary of Hong Kong's return to the motherland. They were two years old at the time of their arrival.

Ying Ying got pregnant in 2015, but miscarried less than a week later.

When Jia Jia first arrived in Hong Kong, she was already a mother to six offspring, with 13 grandchildren, and two great-grandchildren. At the time, she was 21 years old or 60 years old in human years.