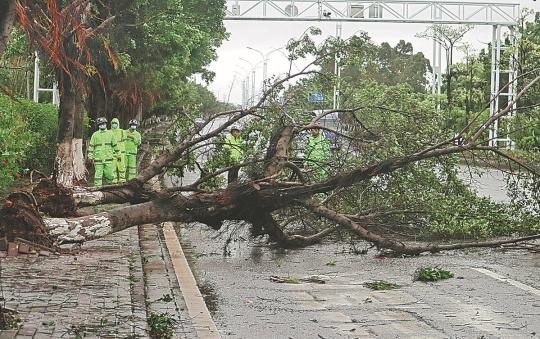 Three people have been rescued and 27 are missing after their ship broke in two during a typhoon off the coast of Yangjiang, Guangdong province, on Saturday morning.

The vessel named Fujing 001, which had worked at an offshore wind power farm, was moored ahead of Typhoon Chaba's arrival and was sunk by the storm, according to the provincial maritime search and rescue center.

After a distress signal was sent at 3:50 am on Saturday, a number of rescue, patrol and commercial vessels were coordinated for rescue efforts.

The Hong Kong Special Administrative Region sent three helicopters and a fixed-wing plane to aid the effort, which led to the rescue of the three people.

The search area was expanded, with the city governments of Yangjiang, Jiangmen, Maoming, Zhuhai and Zhanjiang coordinated to join the rescue.

Chaba, which made landfall in western Guangdong at 3 pm on Saturday, has unleashed heavy rainfall on the provinces of Hainan, Guangdong and Fujian as well as the Guangxi Zhuang autonomous region, according to the National Meteorological Center.

It has also whipped up gales off the coasts of Hainan, Guangdong and Guangxi.

Dacheng township of Guangdong's Maoming recorded 406.7 millimeters of rainfall between 6 am on Saturday and 6 am on Sunday.

In Guangdong's Zhanjiang, fire and rescue personnel in dinghies rescued eight people trapped in the flooded dormitory of a company in Chikan district on Sunday morning.

In the village of Darongshu in Maoming, volunteers and passing drivers cleared away fallen trees blocking a road, with fire and rescue personnel and police officers tackling fallen trees in other parts of the city.

Prior to the typhoon making landfall, 3,683 people were evacuated in Dianbai, and all 1,979 of the district's fishing vessels had returned to the harbor, according to Maoming Daily.

Chaba triggered at least three tornadoes in Chaozhou, Shantou and Foshan in Guangdong on Saturday, according to the provincial meteorological service.

As Chaba weakened after making landfall, train services between Guangdong's capital Guangzhou and Zhanjiang resumed on Sunday, and shuttle buses between Hong Kong and Guangdong's Zhuhai along the Hong Kong-Zhuhai-Macao Bridge resumed on Saturday night.

Heavy rains were forecast for most parts of Guangdong, eastern Guangxi and Hunan province on Monday.