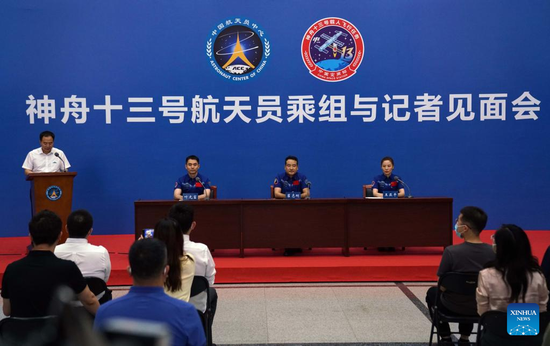 The three astronauts of China's Shenzhou-13 crewed mission met the press and public on Tuesday, the first such appearance after returning to Earth in April.

At the press conference held in Beijing, Jing Haipeng, head of the Astronaut Corps, described the Shenzhou-13 crew's recovery and follow-up plans.

According to Jing, the astronauts have completed the stages of quarantine and recuperation and switched to the observation stage. At present, they are in good physical and mental conditions with normal medical examination results.

The crew have basically restored their cardio functions, said Jing, adding that their muscle strength, endurance and bone density have been well recovered.

Jing said the three astronauts will resume their regular training after completing the health assessment.

They have completed a series of innovative, ground-breaking scientific experiments and space applications in a state of well-being they describe as "feeling good."

Zhai Zhigang is the first Chinese astronaut to perform a spacewalk and has conducted more extravehicular activities than any other Chinese astronaut. He said that the state of "feeling good," both in space and during training, benefits from the development of the country's manned space endeavors.

Wang Yaping is China's first female astronaut to conduct an extravehicular spacewalk and the country's first "space teacher," conveying information on space-related topics to young people. She expects young people to participate in the construction of China's space station.

The three astronauts said they are always ready to return to space again.