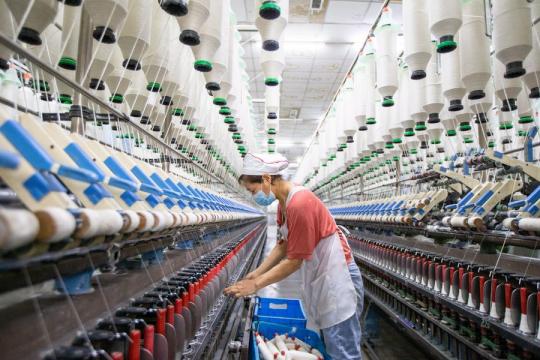 A worker operates on the production line at a textile company in Nanmo Township of Hai'an City, East China's Jiangsu province, Feb 28, 2022. (Photo/Xinhua)

China's economic recovery is set to gather pace in the second half of the year after growth stabilized in May, and the country is likely to keep full-year growth within a reasonable range with more targeted and effective policies, economists and analysts said.

Despite weakening economic activity since March due to a resurgence in domestic COVID-19 cases and changes in the international environment, China is likely to register positive growth in the second quarter and the economy will rebound in the following months with a package of stimulus measures fully taking effect.

Profits earned by China's industrial firms contracted at a slower pace in May as COVID-19 outbreaks eased off and work and production resumed gradually, improving from its biggest slump in April since March 2020, according to data from the National Bureau of Statistics on Monday.

Zhu Hong, senior statistician at the NBS, said the improvement in industrial profits was due to the government's effective measures to contain COVID, resume work and production, and ensure smooth logistics.

Meanwhile, Zhu warned that industrial firms still face pressure from rising costs and difficulties in production and operation, and called for more efforts to implement existing policies on stabilizing the industrial economy and helping enterprises to tide over their difficulties.

Yin Yue, an analyst at Shanghai-listed Hongta Securities, highlighted the substantial improvement in industrial profits in regions that were severely impacted by the pandemic, saying that some major economic indicators are likely to return to pre-pandemic levels as the impact of COVID-19 eases further in the following months.

According to the NBS, the contraction in profits at industrial firms in Shanghai and Jiangsu, Jilin and Liaoning provinces narrowed by over 20 percentage points compared with the previous month.

A range of economic indicators improved in May due to stronger policy support and better control of the pandemic, showing fresh signs of recovery.

Citing recent NBS data, Tommy Wu, lead economist at the Oxford Economics think tank, said both industrial value-added output and fixed-asset investment improved in May after contracting in April as the impact of COVID-19 eased in most parts of China.

"We expect growth to pick up more significantly in June after stabilizing in May," Wu said. "We expect supply chains will normalize in the third quarter, while policy stimulus will play a crucial role in raising domestic demand in the second half."

Wu said he expects to see a stimulus-driven recovery in the second half of the year, notably fueled by infrastructure investment.

"Policymakers have rolled out plenty of stimulus, including those from the Government Work Report and a new round of 33 measures in May. We expect infrastructure investment will do the heavy lifting to support growth in the second half," he said. "We still expect one rate cut in the third quarter as a broad-based monetary easing through rate reduction could be effective in boosting growth."

Zhu Jianfang, chief economist at CITIC Securities, spoke highly of the government's recent 33 policy measures to stabilize the overall economy, saying that China's economy will rebound notably in the second half with such strong policy support.

Despite facing multiple short-term pressures, Zhu said China will continue to remain the largest contributor to global economic growth considering its potential growth rate of over 5 percent during the 14th Five-Year Plan period (2021-25), an abundant supply of labor and the nation's key roles in global trade and industrial chains.

As a result of stronger policy support to stabilize growth, Zhu said his team expects to see China's GDP grow slightly in the second quarter.

"China is likely to see its GDP expand by around 6 percent in the third and fourth quarters, and full-year GDP may near 5 percent in 2022," Zhu said in a recent report on China's economic outlook for the second half of this year.