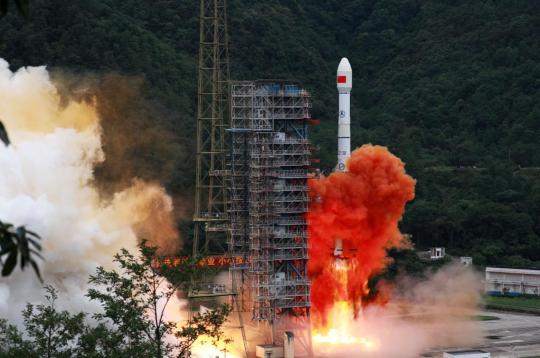 One of the technologies that back up the smart facilities is the Beidou Navigation Satellite System, China's homegrown system known for its high-precision positioning service.

At a farm in Pingyuan county, Shandong province, farmers at Pingyuan Luwang Agricultural Development Co have been using tractors equipped with the Beidou system to plant soybeans between rows of corn since June 15.

This is the first year that the company tried the combined planting of the two crops, allowing farmers to harvest soybeans without reducing corn yields.

"The Beidou system ensures tractors can lay straight rows at precise distances, which is crucial to the mixed plantings," said He Shibao, who is in charge of the company's plantation work.

He said they had sown 40 hectares in two days with the Beidou-equipped tractors.

In addition to supporting the sowing, the Beidou system is also used with machines including harvesters and drones that spread fertilizers to ensure crops can be taken care of and harvested with machinery.

Nationwide, around 600,000 machines had been equipped with the Beidou system by the end of 2021, according to the Ministry of Agriculture and Rural Affairs.

In Hubei province alone, the Beidou system had been installed on 27,407 farm machines in 3,885 agricultural cooperatives. Tractors, harvesters, rice transplanters, grain dry machines and fertilizer sprayers are guided by Beidou under a national project that subsidizes local farmers who equip their machines with it.

For example, farmers who use the Beidou automated driving system receive a subsidy of 8,000 yuan ($1,195).

At Yongwang Agricultural Machinery Cooperative in Huangpi district, Wuhan, Hubei province, machines have all been equipped with the Beidou system, said Hu Dan, head of the cooperative.

The Beidou system, integrated with other technologies, such as remote sensing, helps us monitor the whole farming process and provide precise information on each piece of farmland, helping farmers carry out work according to the individual farmland, said Tao Zhe, an operator of smart machines at the Yongwang cooperative.

"We can oversee the farmland conditions on our mobile phones," said Tao, who began working on the farm after graduating from a university last year. Tao is making further studies on the Beidou system.

"Technologies have made our farming work much easier. My parents came to my farm to see the smart machines and they were impressed by the automated tractors," said Tao. "Farm work today is completely different from my parents' time, thanks to modern technologies such as the Beidou system, which enables a lot of the work to be done by machinery."