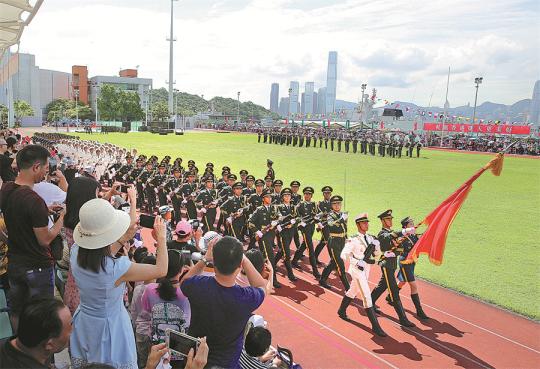 Soldiers from the People's Liberation Army Garrison in Hong Kong parade the national flag during an open day at their barracks. (YI DING/FOR CHINA DAILY)

As the city prepares to mark the 25th anniversary of its return to the motherland, soldiers from the People's Liberation Army are winning hearts and minds.

"Standing here in Hong Kong, we are representing the People's Liberation Army," said Wang Jinyu, a female soldier from an armored infantry company at the PLA's Hong Kong Garrison.

In the decades since the city returned to Chinese rule, the strong sense of mission and responsibility of tens of thousands of soldiers like Wang has made the garrison a symbol of a mighty and civilized force in the minds of the people living in the famous international hub.

"The training regime in the honour guard is quite tough, but all of us insisted on doing it," said Wang, a team leader in the company's Women's Honour Guard, which usually stands in the front row during major events such as military parades and flag-raising ceremonies.

However, one of the most memorable ceremonies the Women's Honour Guard has attended did not take place in military surroundings but at a school, when they raised the national flag at the Heung To Middle School on July 1 last year to mark the 24th anniversary of Hong Kong's return to the motherland.

The day before the ceremony, soldiers from the honour guard visited the school and checked the flagpole, only to find that its height was just half that of the one in their camp.

That meant they were highly unlikely to raise the flag to the top in exactly 46 seconds－the duration of the national anthem－which was the time the soldiers always used to practice hoisting the flag.

With less than a day to go, the soldiers rushed back to their camp and immediately started practicing raising the flag to the new required height. Under the dark sky and bright stars, right through until sunrise, they practiced the drills, which greatly boosted their confidence that all would go perfectly.

As a result, on the 24th birthday of the Hong Kong Special Administrative Region, the team raised the flag, reaching the top of the pole at the precise moment the national anthem ended.

After the ceremony, the local people flocked to take photos of themselves with the flag raisers, who stood at attention in the hot sun, their faces covered in sweat.

Suddenly, a girl with a tissue in her hand walked out of the crowd and said to one of the soldiers: "You worked hard today, my sister. Let me wipe away the perspiration for you!"

Yang Yifan, a platoon leader with the honour guard, said: "At that moment, our whole world lit up. All our efforts had paid off."