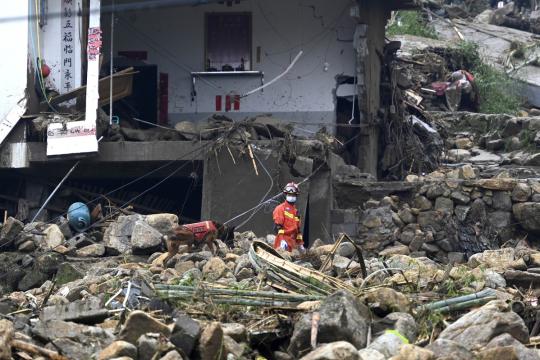 A rescue worker and rescue dog search for survivors among wreckage left behind by mountain torrents in Gudu village of Rongshui county in Liuzhou city, Guangxi Zhuang autonomous region, on June 18, 2022. (Photo by Li Hanchi/For chinadaily.com.cn)

The government's central departments have responded quickly to control flooding in China's southern provinces while helping relieve the effects of the scorching weather seen in the northern parts of the country.

By 6 pm Saturday, six warnings for torrential rain, high temperatures and geological hazards had been released by the China Meteorological Administration, reminding the public of the secondary dangers of floods, mudslides and sunstroke.

Some southern provinces and regions, such as the Guangxi Zhuang autonomous region, experienced flooding caused by persistent heavy rain earlier this month.

A release by the Ministry of Emergency Management said 110 counties in Guangxi had been hit hard by the floods, with nearly 2.35 million people affected.

The ministry said that over 2,700 houses and buildings had collapsed and 10,600 were damaged in the region due to the severe floods. Some 145,000 residents in affected areas have been relocated while around 307,000 people needed assistance with daily supplies.

The region still faces challenges as more torrential rain is forecast through Tuesday, with water levels in some rivers in the region dangerously high.

The emergency management ministry said it is cooperating with the National Food and Strategic Reserves Administration to provide disaster relief supplies including 5,000 tents, 20,000 summer quilts and 20,000 folding beds to support the relocation work of local authorities.

In addition to Guangxi, provinces such as Jiangxi and Guangdong are also experiencing heavy rain, along with extreme weather events such as lightning storms and strong winds.

At 6 pm on Sunday, the China Meteorological Administration and the Ministry of Water Resources released the year's first red warning for geological disasters, saying that the northeast part of Jiangxi has a high probability of collapse, landslide and debris flow. The two central departments urged the local authorities to improve timely monitoring and the release of early warnings as well as the relocation of people at risk.

The Ministry of Water Resources has also increased flood control efforts in Guangxi and Guangdong by boosting surveillance on river conditions and optimizing the use of water diversion projects to help limit flooding.

According to the latest forecasts by the meteorological administration on Sunday, rain will continue in the nation's southern parts and provinces along the middle and lower reaches of the Yangtze River through Tuesday, while hot weather will continue in northern areas.

The administration forecast that the weather will begin a transition from Wednesday, when the southern provinces will see higher temperatures and the Huanghuai area－mainly in central Henan province and eastern Jiangsu and Anhui provinces－will experience rainy weather.

The administration warned that the public should remain alert on the possible risk of flooding, clogged waterways and landslides.