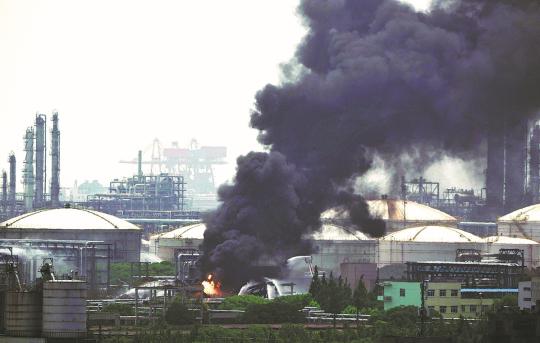 Fire trucks are deployed to douse a blaze at the ethylene glycol plant of the chemical department of Sinopec Shanghai Petrochemical in Shanghai's Jinshan district on Saturday. (GAO ERQIANG/CHINA DAILY)

Shanghai announced on Sunday the launch of a campaign to investigate and rectify hidden dangers that threaten the safe production of hazardous chemicals after a fire broke out at a petrochemical enterprise in the city, leaving one dead.

The focus of the campaign will include improving safety at chemical industrial parks; safety risk management and control of large oil and gas storage facilities; special inspection and supervision of major hazard sources; and safety risk prevention and control of old equipment, said the Shanghai Emergency Management Bureau, which organized the campaign.

It will also include the digital construction of a dual prevention mechanism, the application of industrial internet technology to monitor safe production, and risk management of hazardous wastes, such as discarded hazardous chemicals.

"All enterprises must cooperate to strictly formulate work plans, check hidden dangers, concentrate on rectification, and promote improvement to ensure the elimination of hidden dangers," said the bureau in the notice.

The bureau said on Saturday that an investigation team has been set up to probe the cause of the fire, which happened at 4:28 am at the ethylene glycol plant of the chemical department of Sinopec Shanghai Petrochemical, located in Jinshan district on the outskirts of the city.

Altogether, 563 firefighters and rescuers and 113 fire engines rushed to the site. A driver of a transport vehicle was killed and another worker was slightly injured.

As of 4:30 pm Sunday, the flames had been extinguished and no other casualties were reported. The authorities said that the air and water quality in the surrounding environment have basically returned to normal.

In the notice by the Shanghai Emergency Management Bureau, it said all relevant enterprises must learn from that accident and others that have recently occurred in the country, and always prioritize preventing safety risks while sticking to rigorous epidemic prevention and control protocols.

"Watchdogs at all levels should escalate supervision and safety inspection at enterprises. Spot inspections, on-site assessments and video surveillance shall be used to ensure that the people in charge are performing their duties," said the notice.

The notice also requires all enterprises to make sure there are supervisors on duty around the clock to strengthen emergency response capabilities and report emergency situations without delay.

Separately in Beijing, a citywide safety inspection of hazardous chemical enterprises kicked off on Sunday.