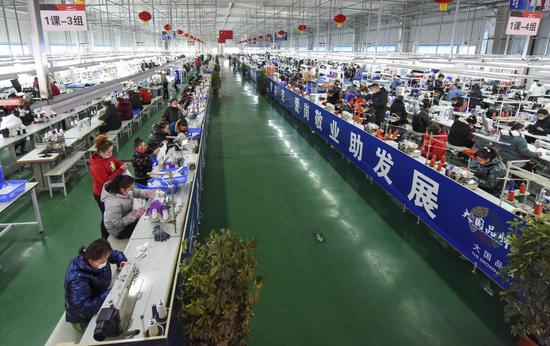 Photo shows an interior view of a workshop at the production base of Erke in Tianjin industrial park in Yutian County, northwest China's Xinjiang Uygur Autonomous Region, Jan. 13, 2022. (Xinhua/Ding Lei)

The government of northwest China's Xinjiang Uygur Autonomous Region has granted over 500 million yuan (about 74.5 million U.S. dollars) of subsidies to stabilize employment.

Employment subsidies are issued to employers for their efforts in recruiting fresh graduates or creating new long-term jobs. According to the regional department of human resources and social security, by the end of May, a total of 222,800 employees in Xinjiang had brought employment subsidies of 509 million yuan to their employers.

Zhang Rong, deputy head of the department, said the region has also stepped up refund of unemployment insurance to employers for their efforts in maintaining jobs.

So far, 832 million yuan has been refunded to 101,000 enterprises and more than 2.2 million jobs have been maintained.

In addition, Xinjiang has expanded the scope of deferral of social insurance premiums for enterprises affected by the epidemic.