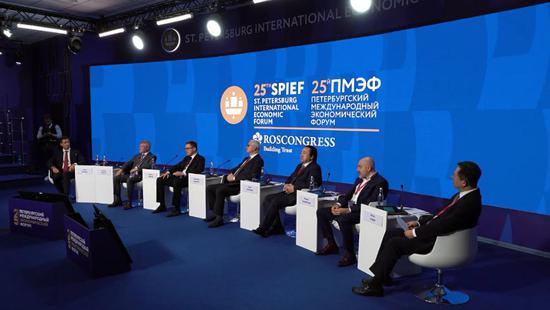 The Russia-China Business Dialogue was held Thursday in the Russian port city of St. Petersburg in the framework of the 25th St. Petersburg International Economic Forum (SPIEF).

Chinese Ambassador to Russia Zhang Hanhui said in a video message that guided by the spirit of mutual respect, equality and pursuit of win-win outcomes, the two countries will continue normal economic and trade cooperation, joining efforts to achieve the target of raising the volume of bilateral trade to 200 billion U.S. dollars in 2024.

While addressing the event, President of the Russian Union of Industrialists and Entrepreneurs Alexander Shokhin noted that Chinese goods are securing a larger market share in Russia and more Russian agricultural products are well-received in China.

Russia's trade representative in China Alexei Dakhnovsky said that there are broad prospects for the two countries to invest and cooperate in the areas of energy, transport, infrastructure and agriculture.

The Russia-China Business Dialogue has been held several times since 2018 within the framework of the SPIEF and the Eastern Economic Forum in Russia's Vladivostok.

Under the theme of New Opportunities in a New World, the 25th SPIEF is being held in Russia's second-largest city from Wednesday to Saturday. Since 1997, the forum has become a leading global platform for the business community to discuss critical economic issues facing Russia, emerging markets and the world.