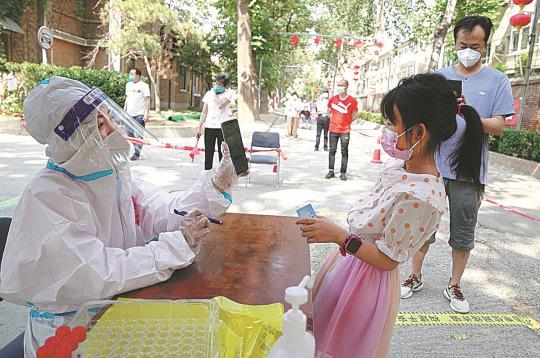 Epidemic control volunteer Ren Ling registers identity information for her daughter during nucleic acid testing for COVID-19 at a community in Haidian district, Beijing, on May 24, 2022. (Photo by CUI JUN/FOR CHINA DAILY)

Most COVID-19 transmission chains reported in the early stages of the ongoing outbreak in Beijing have been cut and the number of infection clusters in the city is declining markedly, a senior official said on Wednesday.

"The number of transmission chains and infection clusters has dropped from around 17 at the peak to three in recent days," he said.

"The new cases are mainly found in controlled zones and quarantine locations."

He explained that Beijing has been fighting against the virus spreading while maintaining normal economic operation, which is not an easy task.

"After various measures the city has taken, the virus spread has been effectively contained. Several major clusters reported previously are now under control."

Beijing reported 51 new locally transmitted COVID-19 cases between 3 pm Tuesday and 3 pm on Wednesday, bringing the total number of infections to 1,642 since April 22, according to Liu Xiaofeng, deputy director of the Beijing Center for Disease Prevention and Control, at a news conference on Wednesday.

Of the new infections, 47 were reported in quarantine locations, and four were found from mass nucleic acid tests at the community level.

"Two infected people who were supposed to be quarantined at home went to supermarkets and workplaces, which added risks of infection," Liu said.

"The epidemic control and prevention work is at a very critical stage at present, and so we should act faster and take stricter measures to cut transmission."

As of Wednesday, Beijing had nine high-risk areas for COVID-19 and 21 medium-risk areas, according to Liu.

On Wednesday, Yu Luming, born in 1961, was removed from his position as director of the Beijing Health Commission by city authorities.

Previously, the National Supervisory Commission and the Central Commission for Discipline Inspection said Yu was suspected of serious violation of discipline and law.

Among the asymptomatic carriers, 11 were found in Northeast China's Liaoning province.

All the local infections were found in the city of Dandong, located in the southeastern part of the province.