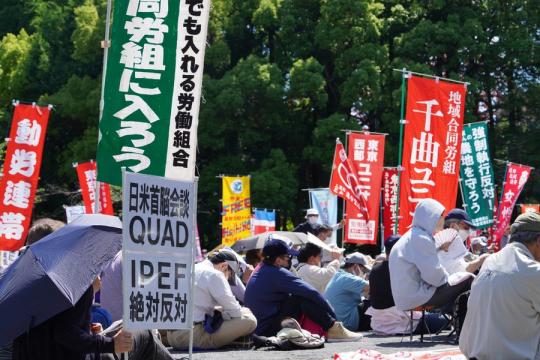 Protesters gather at Shiba Park to demonstrate against the upcoming U.S.-Japan summit and the summit of the Quadrilateral Security Dialogue (Quad), in Tokyo, Japan, May 22, 2022. (Photo/Xinhua)

The Indo-Pacific Economic Framework and the recent statement by leaders of the Quadrilateral Security Dialogue, or Quad, risk fomenting divisions rather than promoting cooperation, and so pose threats to regional economic integration and world economic recovery, according to government officials and experts on Wednesday.

Their comments came after the launch of the US-led IPEF in Japan on Monday－an initiative that a number of countries, including Japan, India and Australia, have joined in.

Quad leaders, from the United States, India, Japan and Australia, said in a joint statement on Tuesday that they will deepen cooperation in critical and emerging technologies including 5G, semiconductors, biotechnology and quantum technologies.

"People will see clearly that the IPEF is designed to disrupt regional cooperation and is a tool for the US to coerce economies in the region," said Wang Wenbin, a Ministry of Foreign Affairs spokesman, at a regular media briefing on Wednesday in Beijing.

"The IPEF, although it includes quite a few countries and regions, doesn't care for the development levels or actual needs of economies in the region. It has no arrangements for tariff cuts or market access, but rather, forces others to accept the so-called high standards from the US," he said.

Experts said that only open regionalism together with mutually beneficial economic and trade collaboration will truly optimize resource allocation, facilitate innovation and protect the development rights and interests of small enterprises and economies, to create more impetus for regional growth.

Though the Quad leaders' statement did not specifically mention China, its push to boost technological ties among those countries is believed to be aimed at downsizing China's presence in crucial global industry chains.

"The initiative aims to contain China's regional influence, but will fail because it falls into the old paradigm of serving US interests and neglects the power of win-win cooperation," said Huo Jianguo, vice-chairman of the Beijing-based China Society for World Trade Organization Studies.

China's deep friendship with all the members of the Association of Southeast Asian Nations and other economies, together with the attractiveness of its huge domestic market and the increasing openness of the Chinese economy, will help it promote mutually beneficial cooperation in the region despite opposing forces, he added.

On Tuesday, a spokesperson for the Ministry of Commerce said in an online statement that the success of the Asia-Pacific economy has benefited from openness, cooperation and mutual benefit.

According to Zhou Mi, a senior researcher at the Chinese Academy of International Trade and Economic Cooperation in Beijing, the US wants to leverage help from its allies to strengthen its leading role in global innovation and industrial chains, and to increase its dominance in global development and technology progress.

However, such a development path will succeed only at the cost of restricting resources allocation and harming small enterprises and economies, he said.

"Every economy should be able to explore development paths that suite them most, or search for the best ways to promote innovation and expand growth through multilateral platforms instead of being trapped in exclusive initiatives," Zhou emphasized.

Xiang Ligang, director-general of the Information Consumption Alliance, a tech industry association, said that as the world's largest chip market, the Chinese mainland is an indispensable part of the global semiconductor industrial chain.

No chip company can ignore such a market, whether it is from the US, Japan, India or Australia, Xiang said.

Lenovo Group Chairman and CEO Yang Yuanqing said earlier that technology and supply chain decoupling will hurt the interests of the world.

"Technology should serve all people around the world. That is not only a moral thing, but also in accordance with the laws of economics," said Yang, while noting that openness and sharing of technological innovation will remain the direction of the tech industry going forward.