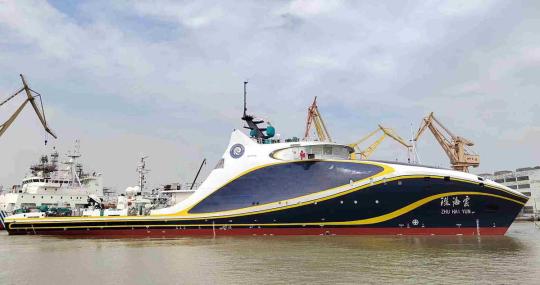 A new cutting-edge research vessel launched in Guangzhou, Guangdong province, on May 18 is expected to play an important role in China's marine science and contribute to the development of the nation's marine economy in the years to come.

Chen Dake, an academician at the Chinese Academy of Sciences, said the vessel, which can be controlled remotely and autonomously in open waters, provides an unprecedented tool for China to carry out marine research and speed up the development of the nation's ocean economy.

Chen christened the vessel Zhuhaiyun, or Zhuhai Cloud, in a ceremony held at the shipyard of CSSC Huangpu Wenchong Shipbuilding, the company that built it.

The vessel in itself is a revolutionary innovation that will change marine observation and research models, said Chen, who is also director of Southern Marine Science and Engineering Guangdong Laboratory, which owns the vessel.

"The vessel is not only an unprecedented precision tool at the frontier of marine science, but also a platform for marine disaster prevention and mitigation, seabed precision mapping, marine environment monitoring, and maritime search and rescue," he said.

It will provide intelligent and efficient solutions for the maintenance of offshore wind farms and will contribute to the country's social and economic development, said Chen.

The vessel is expected to be put into operation before the end of the year.

Li Chong, vice-mayor of Zhuhai, said the vessel will help build a modern maritime city and enhance the country's competitiveness in the marine industry.

Zhuhaiyun is 88.5 meters long and 14 meters wide, with a draft of 3.7 meters and displacement of about 2,000 metric tons. It is designed for speeds of up to 18 knots, equivalent to about 33 kilometers an hour.

It has a spacious deck and can carry many unmanned air, sea and submarine vehicles and will be equipped with a range of observation instruments, according to a statement released on Wednesday by CSSC Huangpu Wenchong Shipbuilding.

The vessel can be deployed in a target area and carry out 3D dynamic observation. The operation of the vessel will help obtain real-time 3D ocean observation data and improve the efficiency and level of ocean observation, the statement said.

It will also contribute to the development of high-end marine scientific and technological talent and improve innovation, it said.

The contract for building the vessel was signed on Dec 28, 2020, and construction began on July 20 the following year.