Envoys stand together over climate issue 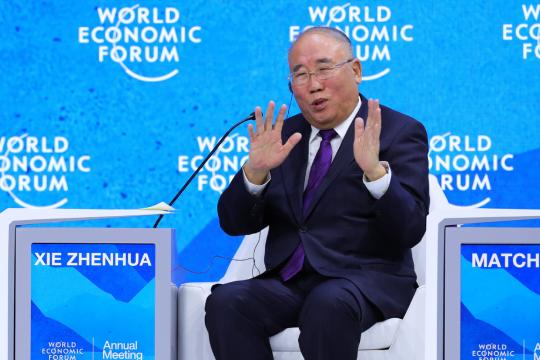 Beijing and Washington urge world to ditch the excuses about warming

China's special climate envoy, Xie Zhenhua, has said the world "cannot abandon" the Paris Agreement on climate change, and his United States counterpart, John Kerry, has said countries should not use the Russia-Ukraine conflict as an excuse to delay action on global warming.

Speaking at the World Economic Forum annual meeting in Davos, Switzerland on Tuesday, Xie urged all countries to work together and "walk the walk" on climate.

"We have to turn our pledges into concrete actions," said Xie, who represented China at the United Nations Climate Change Conference, or COP26, in Glasgow in November, when the rule book for the Paris Agreement was finalized and where countries agreed to lessen reliance on fossil fuels and reduce the use of coal.

Despite this progress, global carbon emissions increased by 6 percent and coal-generated power went up 9 percent in 2021, according to the International Energy Agency.

"In Davos, we are facing an even greater challenge than before," Xie said while participating in a panel discussion along with Kerry, who is the U.S.' special presidential envoy for climate.

Kerry said: "Now, Ukraine is being used as a lever, to make the argument that you've got to have this energy security, which you do have to have, nobody doubts that, but it's a headlong plunge to say it means we need to drill a lot more and pump a lot more and build out more infrastructure."

Xie and Kerry met more than a dozen times last year and were instrumental in finalizing the U.S.-China Joint Glasgow Declaration on Enhancing Climate Action in the 2020s, which was announced at COP26.

Xie said: "Kerry is my good friend, at COP26 we made a joint declaration, and what we will do now is turn this joint statement into action and cooperation between the U.S. and China."

Kerry said that, in Glasgow, collective pledges meant that 65 percent of global gross domestic product is now committed to keeping global warming to within 1.5 C this century.

"That means 35 percent did not join," Kerry said. "We need to move, accelerate, do more. Xie understands that and is committed to it."

Kerry said the U.S. "now has momentum" after it "lost four years "in the climate fight, which alluded to the previous administration's rejection of the Paris Agreement.

Xie outlined a number of "proactive and concrete actions" that China has taken during the last few years to accelerate its green transition, including peaking carbon emissions by 2030 and achieving net-zero emissions by 2060.

Xie said the proportion of coal in the country's energy mix has dropped from 74 percent to 56 percent in recent years, and China will no longer build coal plants abroad. Xie added that China has now reversed forest loss and will plant 700 million new trees during the next decade.