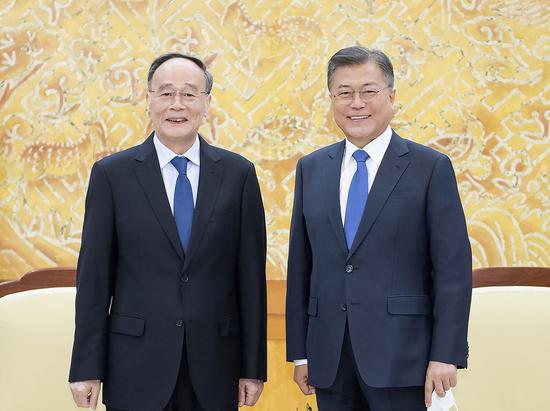 The Chinese and South Korean economies are highly integrated, Wang said, adding that in particular, economic cooperation between the two countries managed to grow amid the sluggish global economy last year, demonstrating the resilience and great potential of bilateral economic cooperation.

"No matter how the international and regional situation changes, the fundamentals of China-South Korea friendly cooperation will not change and cannot be changed, which is an important inspiration from the history of bilateral relations," he noted.

China appreciates South Korea's important contributions to improving inter-Korean relations and promoting the political settlement of the Korean Peninsula issue, Wang said, noting that China stands ready to enhance communication and coordination with South Korea to make joint efforts to realize the denuclearization of the Korean Peninsula and lasting peace and stability in the region at an early date.

For his part, Moon said that over the past five years, South Korea-China relations have overcome difficulties and achieved development, expressing his hope that the next government will maintain such a momentum.

South Korea speaks highly of China's constructive role in the Korean Peninsula affairs, Moon said, adding that the country is ready to work with China to take the 30th anniversary of diplomatic ties as an opportunity to further strengthen communication, expand cooperation and continuously enhance mutual understanding between the two peoples, so as to lift bilateral ties to a higher level.