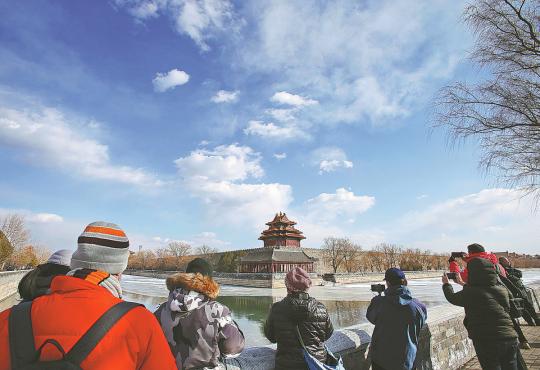 Favorable meteorological factors and pollution reduction measures contributed to the progress, according to the 2021 Atmospheric Environment Meteorological Bulletin issued by the China Meteorological Administration on April 1.

Xue Jianjun, deputy director of the National Meteorological Center, said at a recent news conference that despite progress as a whole, meteorological conditions caused ups or downs in PM2.5 data in different areas last year.

While in the Pearl River Delta, less wind and less effective precipitation-that which exceeds the threshold needed to be stored in the soil-increased the PM2.5 concentration by up to 10 percent compared with 2020, he said.

He said that on six occasions last year there was large-scale smoggy weather that occurred under adverse meteorological conditions.

"We will continue to carry out heavy pollution and weather monitoring, forecasting and early warning work," Xue said.

Zhang Bihui, director of the center's environment meteorological department, said since its first release in 2016, the bulletin has served as a reference for the Ministry of Ecology and Environment and the National Forestry and Grassland Administration to evaluate the results of their work.

For example, the bulletin highlighted snow accumulation monitoring and analysis especially in sandy environments like the border area with Mongolia to help forestry and grassland departments with sand-source area management. Partly due to less snow cover, sand and dust storms that have been the strongest in the past decade hit China from March 13 to 18 last year, the administration said.