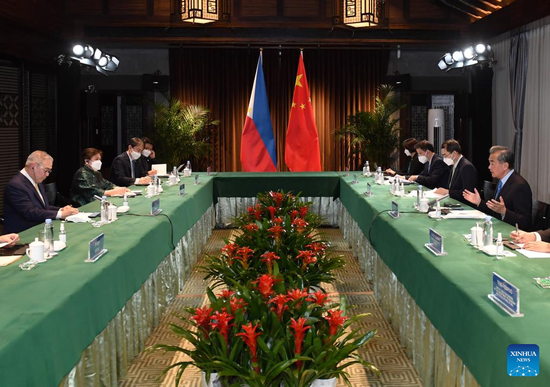 Wang said China always takes the Philippines as a priority in its neighborhood diplomacy, and China's good-neighborly and friendly policy toward the Philippines has maintained continuity and stability.

The two sides should remove disturbances, calmly and properly manage differences and not let them affect the overall situation of China-Philippines relations, Wang said.

China is ready to speed up the construction of key infrastructure projects with the Philippines, and continue to provide COVID-19 vaccine assistance and enhance public health cooperation according to the need of the Philippines, Wang said.

As a responsible major country, China is committed to independence and peaceful development, setting a new example in a turbulent world, Locsin said, adding that China has long promoted the development of other countries in the region through its own development and played an irreplaceable role in global economic growth.

The two sides exchanged views on the South China Sea issue and held that maritime issues should be placed in an appropriate position in bilateral relations.