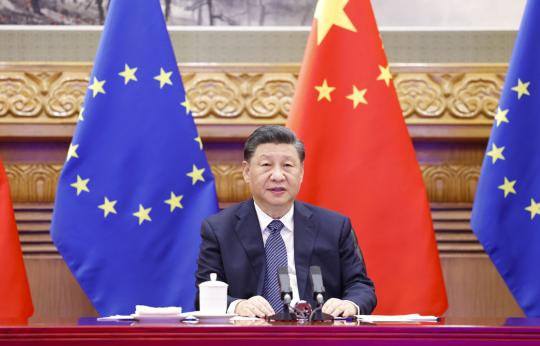 President Xi Jinping reaffirmed China's support on Friday for peace talks in resolving the Ukraine crisis, saying that China and the European Union should remain committed to bringing the situation under control and preventing a spillover of the crisis.

Speaking during a virtual meeting with European Council President Charles Michel and European Commission President Ursula von der Leyen, Xi said Beijing supports the endeavor made by the EU to resolve the situation in Ukraine and the nation has always been promoting peace talks in its own way.

Xi reiterated that Beijing finds it deeply regrettable about the current situation in Ukraine, saying that it has been the consistent and clear position of China to always stand on the side of peace, assess the situation independently and make judgments on the basis of the merits of the issue.

The international community should continue to create the conditions and the environment for negotiations between Russia and Ukraine, and open up space for a political settlement, rather than fuel the crisis or heighten tensions, he said.

China, after having provided several batches of emergency aid to the Ukrainian side and supplies to European countries receiving large numbers of refugees, stands ready to maintain dialogue with the EU to jointly avert a humanitarian crisis on an even larger scale, he said.

The president highlighted the need to ensure lasting peace in Europe and the Eurasian continent.

The fundamental cause of the Ukraine crisis lies in the longstanding regional security conflict in Europe, and the fundamental solution is to accommodate the reasonable security concerns of various sides, he said.

He cautioned against the use of a Cold-War mentality to develop global and regional security frameworks, saying that China supports the leading role of the EU and dialogue between the EU, Russia, the United States and NATO to face up to the contradictions accumulated over the years and find a solution to problems.

In properly handling the crisis, one should not take the wrong medicine, or focus on just one aspect of the issue without regard to the rest, or hold the entire world hostage, he said, adding that it is important to avoid making ordinary people around the world suffer as a result.

Such attempts will trigger serious crises in global finance, trade, energy, technology, food, industrial and supply chains, among others, he said.

If the situation continues to worsen, it could take several years, if not decades, to get things back on track, he said, citing the concerns of many people that the current situation may wipe out the fruits of international economic cooperation gained through decades of efforts.

China and the EU should keep the system, rules and foundation of the global economy stable in order to boost public confidence, he said. 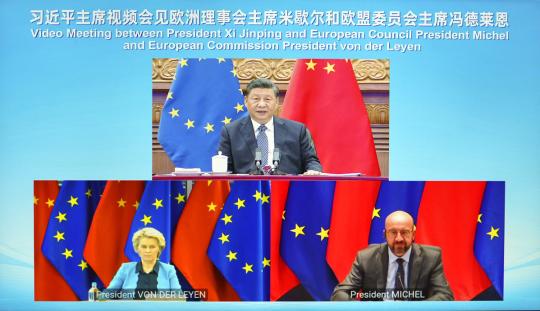 The president urged the EU to adopt an independent China policy and work with Beijing for the steady and sustained growth of bilateral relations.

He stressed that China and the EU should act as two major forces upholding world peace, and offset uncertainties in the international landscape with the stability of China-EU relations.

The two sides should jointly reject the resurrection of a rival-bloc mentality and oppose attempts to start a new Cold War, with a view to maintaining world peace and stability, he said.

He highlighted the importance of seeking greater synergy between the development strategies of China and the EU and exploring more areas of complementarity between China's new development philosophy and paradigm and the EU's trade policy for open strategic autonomy.

The two EU leaders told Xi that the bloc looks forward to candid communication with Beijing to sustain the good momentum of relations, and it is willing to continue deepening cooperation in the economy, trade, investment, energy and green development.

The two sides should jointly respond to global challenges including COVID-19, climate change and the protection of biodiversity, they said.

The meeting was held after the 23rd China-EU leaders' meeting on Friday, co-chaired by Premier Li Keqiang and the two EU leaders via video link.

Beijing suggested the two sides step up policy coordination on the response to COVID, as well as climate change and the digital economy on the basis of current dialogue mechanisms to foster new highlights in bilateral cooperation, Li said.

China and the EU should jointly maintain the security of energy and grain supplies and the stability of industrial and supply chains, respond to common challenges and ensure the sustainable recovery of the global economy, he said.