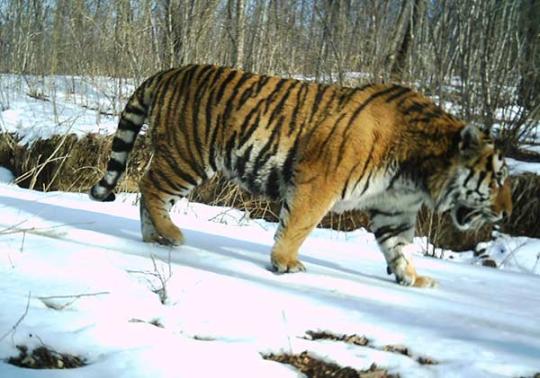 An image of a Siberian tiger taken with an infrared camera in Hunchun, Northeast China's Jilin province. (Photo/Xinhua)

The Siberian tiger, an endangered wild animal in China, has seen its population surpass 50 thanks to the country's environmental protection efforts.

At Northeast China Tiger and Leopard National Park, which spans Jilin and Heilongjiang provinces, more than 50 Siberian tigers and several cubs have been captured by its surveillance system, Yang Zhongqi, chief expert at Chinese Academy of Forestry, said before the closing of the fifth session of the 13th National Committee of the Chinese People's Political Consultative Conference on Thursday.

The Siberian tiger, dubbed the "king of the forest", has a strong, agile body and is the largest of all felines.

The species is noted as critically endangered on the International Union for Conservation of Nature's Red List of Threatened Species.

Yang said the Siberian tiger was once severely threatened and had seen a population decline due to the influence of human activities, including mining, excessive logging and illegal hunting.

"Over the past years, China has made great efforts to ensure forest protection and has significantly improved the habitats of the Siberian Tiger and other wildlife," said Yang, a CPPCC National Committee member.

He said China has established many natural reserves that now cover 18 percent of its land, and large-scale greening projects have helped expand the nation's forest coverage to 23 percent.

"All these efforts are aimed at building China into a more beautiful country with lucid waters and lush mountains," Yang said.

In 2013, the central government implemented a national park system with the aim of establishing a series of facilities and building a unified management system by 2020.