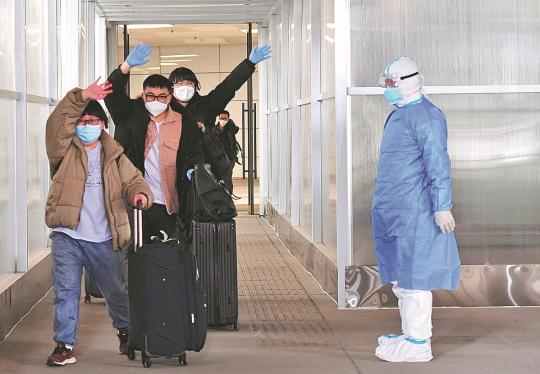 "From 10 am Moscow time (0700 GMT), the Russian side declares a cease-fire and the opening of humanitarian corridors to allow civilians to leave Mariupol and Volnovakha," the Russian Defense Ministry was quoted by Russian news agencies as saying.

The humanitarian corridors and exit routes were agreed with the Ukrainian side, the ministry said. It would be the first breakthrough in allowing civilians to escape the war.

Mariupol and Volnovakha, located in Ukraine's extreme southeast corner near the Russian border and Crimea, have borne the brunt of some of the most intense fighting in recent days.

"In Mariupol and Volnovakha, evacuation humanitarian corridors are being prepared for opening, and columns of those to be evacuated are being formed. The parties temporarily ceased fire in the area of corridors," tweeted Mykhailo Podoliak, adviser to the head of the office of Ukrainian President Volodymyr Zelensky.

However, late on Saturday, the Ukrainian president's office said the evacuation effort was stopped in the city of Mariupol because the area remained under fire.

At the same time, the Russian and Ukrainian delegations are expected to hold a third round of talks in the coming days. During a telephone conversation with German Chancellor Olaf Scholz on Friday, Russian President Vladimir Putin said he hoped for a reasonable and constructive position of the Ukrainian side in the next round of talks.

The Kremlin said Putin reiterated that Russia is open for dialogue with Ukraine, but insisted "the implementation of all of Russia's demands".

On Saturday, Kremlin spokesman Dmitry Peskov said Russia's special military operation is not aimed at dividing Ukraine as Russia just seeks to ensure its own security, and Moscow is waiting for the third round of talks.

Peskov responded on concerns relating to the fire at Ukraine's Zaporozhye Nuclear Power Plant after fierce fighting on Friday. He said the station continues to operate normally, and the "nuclear reactor, the heart of the station, was never touched".

The cease-fire came as Putin signed into law on Friday a bill introducing jail terms of up to 15 years for fake news on the Russian army.

The bill, adopted by lawmakers earlier on Friday, sets out jail terms of varying lengths and fines on people who publish "knowingly false information" about the military, with harsher penalties to hit when dissemination is deemed to have serious consequences.

Putin also signed a bill that would allow fines or jail terms of up to three years for calling for sanctions against Russia.

Russia's media watchdog said on Friday it had restricted access to the BBC and other independent media websites, and blocked social media giant Facebook.

Two flights chartering evacuated Chinese citizens from Ukraine arrived in China on Saturday, the first of such flights. One arrived in Hangzhou, Zhejiang province, at 5:41 am, and the other in Zhengzhou, Henan province, at 9:46 am.

Wang Qingyun in Beijing contributed to this story.