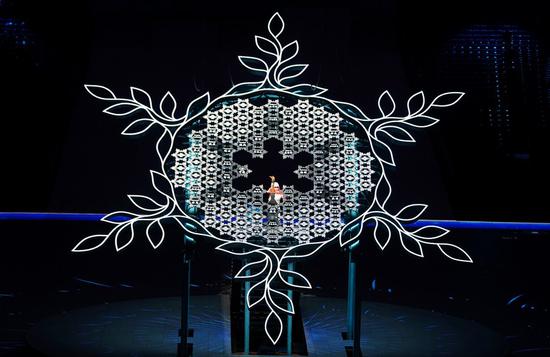 Numerous foreign media outlets and China observers have applauded the opening ceremony of the Beijing 2022 Winter Paralympics, saying the event conveyed a message of confidence, friendship and hope, and embodied the ideal of building a community with a shared future for mankind.

Having watched the opening with eagerness, Ronnie Lins, the director of the China-Brazil Center for Research and Business, said he feels thankful that China presented a wonderful ceremony of the major sporting games once more.

Lins believes that the Winter Paralympics will inspire more people with disabilities around the world to embrace sports and stay positive in the face of challenges in life.

Noting that the storytelling portion of the ceremony featured a mix of performers with and without disabilities, U.S. broadcaster NPR commented that the themes of reconnection and inclusivity took center stage at the opening ceremony.

On its Twitter account, NBC Olympics introduced Shuey Rhon Rhon as "a Chinese lantern child and the glow emanating from their heart symbolizes the friendship, warmth, courage and perseverance of Para athletes."

Noting that Asia is having its best ever representation at the Paralympic Games, Gulf News reported that holding two Winter Paralympic Games in Asia in a row has "really helped to drive the growth of winter sports."

Two out of three Germans further believed the Olympic and Paralympic Games were important for international understanding and friendship between countries and regions, according to the survey of more than 2,000 respondents in Germany.