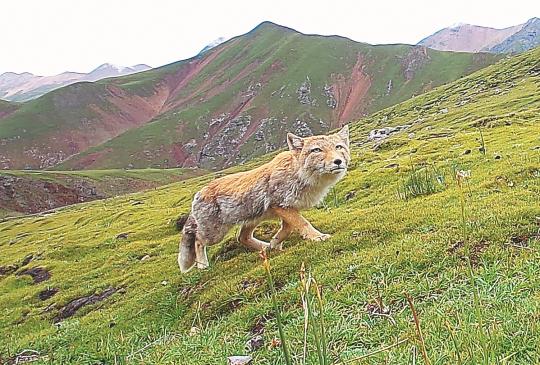 A Tibetan fox, a second-grade State protected species in China, is captured by a remote camera in Lhasa, Tibet autonomous region. (Photo/China Daily)

A wildlife survey has found that Lhasa, capital of the Tibet autonomous region, is home to more than 90 wild animal species, the city's ecology and environment bureau said.

The bureau launched the survey project in June, with the support of the Chinese Research Academy of Environmental Sciences, to check the city's biodiversity status.

Between June and August, 49 infrared cameras were placed in high-density areas for wildlife movement in the city's districts and counties. Images of 91 animal species were captured, including 26 species of mammals, 64 birds and one reptile.

The bureau cited an expert from the academy as saying that the three-month survey exceeded expectations and revealed the rich diversity of wildlife species in Lhasa.

Dekyi Yangzom, deputy head of the bureau, said biodiversity is not only the material basis for human survival and development, but also an important strategic resource to maintain the nation's ecological safety.

"At the seventh Central Symposium on Tibet Work, held in 2020, it was clearly stated that conserving the ecology of the Qinghai-Tibet Plateau is the greatest contribution to the survival and development of the Chinese nation," she said.

Dekyi Yangzom said measures to conserve the plateau ecosystem have included funding guarantees for efforts to protect forests, animals, plants and wetlands, the implementation of biodiversity conservation plans, and the protection and restoration of the city's natural environment.

"Thanks to the great efforts made to ensure the city's air, water and environment are free of pollution, Lhasa's air quality has placed top among China's 168 key cities, and the city's main rivers, lakes and sources of drinking water remain in good condition," she said.

Lhasa has 26 natural reserves and other ecologically important places under strict protection, and the vegetation coverage rate on grasslands has reached more than 69 percent, she added.

The bureau said it will continue to work with the academy to place more infrared cameras and train residents to improve biodiversity monitoring.

"We will also seek more funding to carry out long-term monitoring and evaluation work of the biodiversity in Lhasa, which will help to ensure the city's biosafety and sustainable economic and social development," Dekyi Yangzom said.