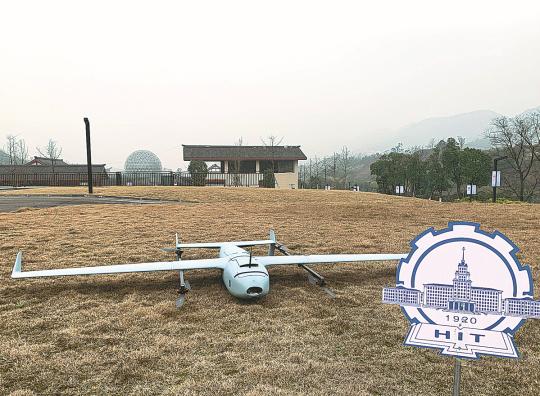 The Qing Ou 30 drone prepares for a test flight in Chongqing. (Photo for China Daily)

A hydrogen-powered, fixed-wing, vertical takeoff and landing (VTOL) drone with the longest endurance of its kind in China has been developed in Southwest China's Chongqing municipality and is likely to be put into service in two to three years.

The unmanned aerial vehicle named Qing Ou 30, which means "blue seagull" in Chinese, can fly up to 800 kilometers in nine hours at speeds of up to 90 km/h with a 3-kilogram-load, according to the Hydrogen Power and Low-Carbon Energy Research Center, which is affiliated with the Chongqing Research Institute at the Harbin Institute of Technology. The drone, which has a wingspan of 4 meters, made its maiden flight at the center last month, carrying the maximum takeoff weight of 30 kgs.

Qin Jiang, director of the center, said the Qing Ou 30 took a team of seven researchers more than a year to build. He said the drone has an impact-ventilated fuel cell power system, which reduces the power of its subsystem and greatly improves its operational efficiency.

"It is the fixed-wing, hydrogen powered VTOL drone with the best endurance in the country," Qin said.

"Greater endurance has long been our goal in developing unmanned aerial vehicles. Additionally, the Qing Ou 30 comes with the option of cleaner energy."

Data from the Shenzhen UAV Association shows that the UAV industry was worth 67 billion yuan ($10.5 billion) in 2020, a rise of 33 percent year-on-year.

"The longer its battery lasts, the greater the value it achieves," said Shen Tieling, one of the team members, adding that the new long-endurance drone can be particularly useful in military reconnaissance. "It could serve as an eye in the sky for modern warfare and provide continuous monitoring."

The drone's applications for civil use are also significant. For example, a 10-km inspection of high-voltage power lines in the wild that would normally take a person hours or even days can be accomplished by UAV in only 10 minutes.

It can also perform other tasks, such as inspecting oil pipelines, conducting geological surveys and helping with logistics, transportation and emergency rescues. "The biggest obstacle remaining is improving its maximum power point (MPP)," Shen said.

To build a brand-new system that utilizes hydrogen-powered batteries instead of traditional lithium ones, he said the team had to make improvements during ground tests to solve the issue of battery overload, which could lead to a dangerous leakage of hydrogen.

As the main application of hydrogen energy today, hydrogen fuel cells have a much higher energy density than traditional lithium batteries, which makes them more convenient and safer to use, and they do not produce secondary pollution. Compared to an internal combustion engine, hydrogen fuel cells give off zero emissions and produce low levels of vibration. They are one of the best choices for powering high endurance UAVs. "A hydrogen cell can last about three to four times longer than a lithium battery UAV of the same power," Qin said.