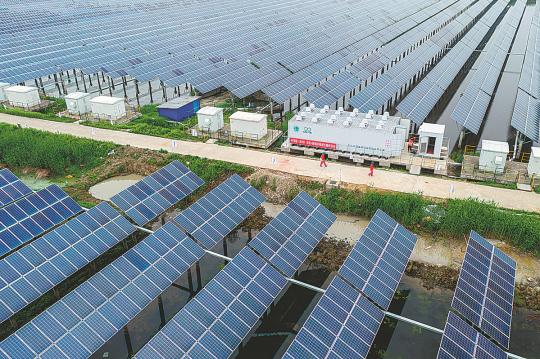 China aims to further develop its new energy storage capacity, which is expected to advance from the initial stage of commercialization to large-scale development by 2025, with an installed capacity of more than 30 million kilowatts, regulators said.

The country has vowed to realize the full market-oriented development of new energy storage by 2030, as part of efforts to boost renewable power consumption while ensuring stable operation of the electric grid system, a statement released by the National Development and Reform Commission and the National Energy Administration said.

New energy storage refers to electricity storage processes that use electrochemical, compressed air, flywheel and supercapacitor systems but not pumped hydro, which uses water stored behind dams to generate electricity when needed.

The NDRC said new energy storage that uses electrochemical means is expected to see further technological advances, with its system cost to be further lowered by more than 30 percent in 2025 compared to the level at the end of 2020.

Analysts said accelerating the development of new energy storage will help the country achieve its target of peaking carbon emissions by 2030 and achieving carbon neutrality by 2060, as well as its ambition to build a clean, low-carbon, safe and efficient energy system.

"While the cost-learning curve is still relatively slow now, the 14th Five-Year-Plan (2021-25) has made a clear goal for the per unit cost of energy storage to decrease by 30 percent by 2025. This will hopefully accelerate the industry pace."

China is currently the world's biggest power generator. While it is aiming for renewable power to account for more than 50 percent of its total electricity generation capacity by 2025, up from the current 42 percent, this would create challenges to maintaining stable operation of the electrical grid system, as renewable energy is subject to varying weather conditions.

Luo Zuoxian, head of intelligence and research at the Sinopec Economics and Development Research Institute, said shortcomings of a new power system lie in the energy storage, which is also a worldwide issue, and improving the new energy storage capacity will further improve the country's new power system.

The commission said earlier it will introduce a plan for new energy storage development for 2021-25 and beyond, while local energy authorities should also make plans for the scale and project layout of new energy storage systems in their regions.