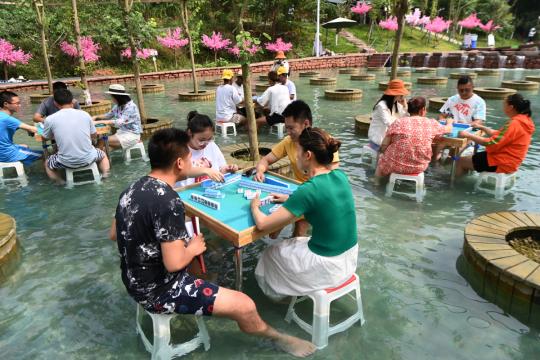 People play mahjong while cooling their feet in water to escape the heat in Chengdu, Sichuan province, on July 7, 2021, which marked the Minor Heat, a traditional Chinese solar term. (China News Service/An Yuan)

Xiao Chan, deputy director of the National Climate Center, told a news conference on Tuesday that global warming has exacerbated the instability of the climate system and increased the atmosphere's water-holding capacity.

"Research has shown that every 1 C increase in atmospheric temperature can cause a 7 percent increase in water vapor content," he said. "Under the context of global warming, more frequent extremely heavy precipitation events occurred."

Last autumn, North and Northwest China were hit by the most rain since 1961, causing floods in the Yellow River Basin.

Zhengzhou, capital city of Henan province, experienced 201.9 millimeters of precipitation in an hour, a record for the Chinese mainland. The annual precipitation in Beijing, Tianjin and Hebei province also reached record highs, the report said.

In March last year, North China saw the strongest sandstorms in the past decade. They affected 19 provinces, regions and municipalities and reached as far as East China, including Jiangsu, Anhui and Zhejiang provinces.

The number of deaths and missing people due to meteorological disasters in China last year was 737, down 33 percent on the average for the previous decade. The disasters caused about 321 billion yuan ($50.8 billion) in economic losses, 5.2 percent less than the 10-year average, the report said.

"Over the years, we have been improving our forecasting and early warning service capabilities to prevent and reduce disasters," Xiao said.

"To ensure food safety, we can adjust the layout of grain varieties according to the effects that climate change imposes on different plantation areas," he said. "For example, more drought-resistant grain varieties should be developed in arid regions."