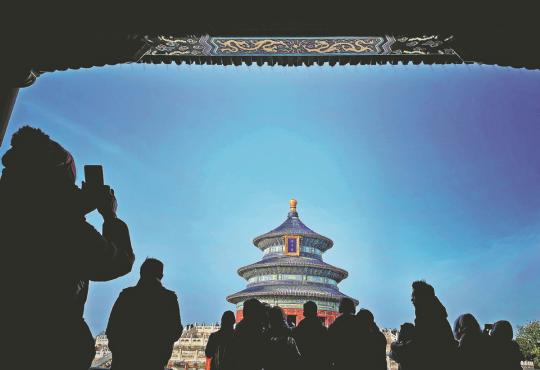 Visitors to the Temple of Heaven in Beijing enjoy a clear sky in November. Municipal authorities have announced a comprehensive success in improving the city's air quality. (China Daily/Du Lianyi)

Zhang Fan, 36, a movie visual effects designer who returned to Beijing from New Zealand for work last year, was surprised by the improvement to the city's air quality.

"I remember the smell in the air and the frequent smoggy days before I left in 2013, after getting a job offer from a film company in New Zealand," he said.

Last year, a Chinese company offered Zhang a more promising position, so he returned, saying that he could find more opportunities in his line of work in Beijing than elsewhere.

In addition to rapid economic development in the Chinese capital, he said the most impressive change is the local air quality.

"People discussed air pollution a lot when I was in Beijing previously. Now, it seems that the topic has disappeared completely, as every day is good in terms of air quality," Zhang said. "The sky in Beijing these days is so clear."

On Jan 4, the municipal authorities in Beijing announced a comprehensive success in improving air quality, with the city's annual average concentration of fine particulate matter in the air, or PM2.5, falling to 33 micrograms per cubic meter, and ozone concentration dropping to 149 mcg per cu m last year.

Yu Jianhua, spokesman for the Beijing Municipal Ecology and Environment Bureau, said at a news conference, "This is a milestone for Beijing's hard work in combating air pollution and also means that the city has met its air quality target outlined in the 14th Five-Year Plan (2021-25) ahead of schedule.

"Beijing has demonstrated to the world over the past 20 years that a megacity with a rapidly increasing GDP, vehicle count, population and energy consumption can move forward to cut air pollution effectively. The PM2.5 reduction over the past few years has surpassed that of developed countries during the same period."

According to the bureau, the city's average concentration of PM2.5 dropped by 63 percent last year from 2013, an average annual reduction of about 8 percent.

This achievement is clear to see and exciting, but it has not been easy work.

Yu said Beijing introduced large-scale air pollution control efforts in 1998, with a series of supportive measures taken since then. "It was a long-term process, involving three stages and many challenges," he added.

From 1998 to 2012, the city authorities focused on solving pollution caused by coal-burning and carbon emissions from vehicles. They also upgraded the quality of petroleum.

The focus from 2013 to 2017 was on dealing with PM2.5 by adopting a strict action plan with 84 key measures. Specific companies and institutions were told to complete the task within this period.

These five years were the toughest period during the entire process, which involved efforts by residents, companies and the government in cutting emissions. In 2017, Beijing's average concentration of PM2.5 dropped to 58 mcg per cu m from 89.5 mcg per cu m in 2013.

Since 2018, the city has worked to maintain blue-sky days, with related measures being switched from an industrial scale to detailed management work.