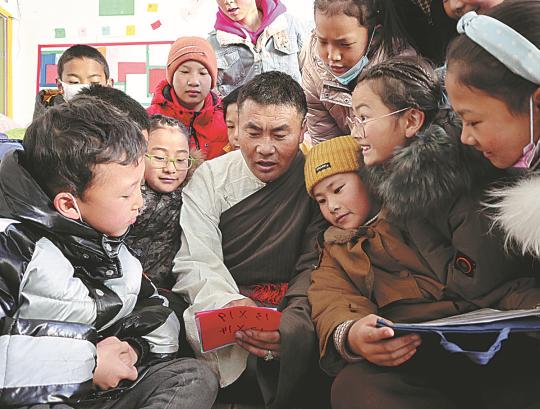 Gyaltsan (center) teaches students how to use his multiplication chart at a primary school in Lhasa, Tibet autonomous region. (China Daily/Palden Nyima)

As opposed to the small and big 9x9 multiplication charts, which are used nationally and make use of numbers, the new charts use 31 Chinese characters, including 11 referring to numbers.

Gyaltsan showed an aptitude for math at school 30 years ago, but he left before finishing primary school.

He is, however, good at devising new things, and in addition to running a Tibetan cafe with his wife in Lhasa, he has an interest in cultural preservation and has collected the histories and former names of 700 places in Lhasa that most people have forgotten today.

Gyaltsan has also written three Tibetan grammar books, which are suitable for students from primary to high school and are ready to be published.

Four years ago, based on the existing 9x9 multiplication charts, which use Arabic numerals, he began to devise a new chart based on formulas derived from Tibetan chess and dice games.

Through repeated experimentation with his daughters, the new system eventually worked.

"I've heard that Indians are good at math, and as the Tibetan culture and alphabet are closely related to Indian culture, I thought that I could come up with a multiplication chart based on our culture," Gyaltsan said. "It takes about a month for a primary school student to master the oral formula and about 90 seconds to recite it, and it only takes around six minutes for a student to finish 120 multiplication exercises using my chart."

Even slower students take less than eight minutes to finish a 120 multiplication exercise, while it takes one of the best fifth grade students at Lhasa's Second Primary School up to 16 minutes to finish the same number of exercises without using his method, he added.

"It can take students who are not good at math around 30 minutes if they calculate using the traditional way," Gyaltsan said.

The chart is better suited to primary students between grades three and five, he said, but anyone can learn, and it contributes greatly to oral arithmetic skills.

Gyaltsan held test classes at home for a month, attracting the participation of many students.

Now, there are two versions of his multiplication chart, Tibetan and Mandarin.

"In the future, I want to publish both. The Mandarin version is targeted at students across the Chinese-speaking world, and the Tibetan version is aimed at children in rural Tibet," he said.

At the moment, Gyaltsan is thinking of finding a Chinese publishing house to publish his chart so that more people can benefit.

His work has already been copyright protected, and recently, he was given a work registration certificate entitled the "Mathematical Secrets of Big 9x9 Multiplication Chart" by the Copyright Protection Center of China.

Legdron, Gyaltsan's youngest daughter, who is a fifth grader, is a direct beneficiary of her father's invention.

She said that she studied the chart during her winter vacation last year, and it took her about a month to learn it by heart.

"When we do multiplication, I am much faster than students who have not learned it, and I find it so convenient," the 11-year-old said.

"My math used to be poor, but since I memorized the chart, I've progressed, and my grades are now in the upper-middle rank in class."