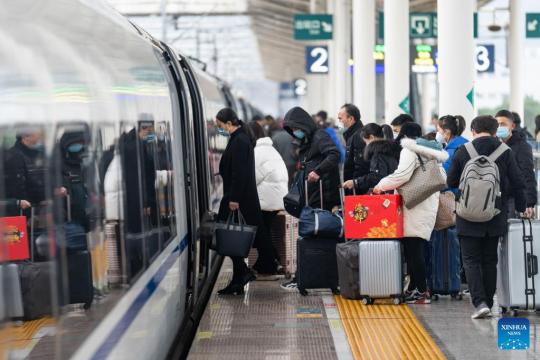 Passengers queue up to board the train G868 at Ruian Railway Station in Ruian, East China's Zhejiang province, Jan 17, 2022. (Photo/Xinhua)

Although China's railway sector saw a bump in passenger trips during the Spring Festival travel rush, figures were still low compared to the year before the COVID-19 pandemic.

China State Railway Group, the national railway operator, said 253 million trips were made during the 40-day period, up 16 percent compared with last year. In the same period, 420 million metric tons of cargo were handled, a year-on-year increase of 1.4 percent.

But during the record-setting rush in 2019, the last one before the COVID-19 pandemic, more than 410 million passenger trips were made via the railway network－nearly 40 percent higher than this year's figure.

This year's Spring Festival travel rush started on Jan 17 and ended on Friday. It was the third such travel rush since the start of the pandemic.

Over the past four decades, the railway sector in particular has served as an important means of transportation for hundreds of millions of people looking to visit their families during chunyun.

COVID-19 hit China in December 2019, and the next month, during the Spring Festival travel rush, the railway network handled about 210 million passenger trips, a year-on-year decline of 47.3 percent.

For last year's rush, the railway system saw signs of recovery, with 218 million trips made during chunyun, a year-on-year increase of 3.5 percent.

To follow pandemic control protocols while still offering passengers comfortable and convenient services, the railway operator has gradually developed a system to handle a large amount of traffic.

Railway operators adjusted their train schedules every day to offer sufficient seating, while avoiding offering too many services. The adjustment was based on predictions and studies of ticket sales and passenger traffic.

Some chartered services for migrant workers and college students were put into operation.

Last year, about 4,208 kilometers of railway lines began operations. All were integral during this year's travel rush and created more passenger trips.

Still, pandemic control protocols have undoubtedly had an impact on travel since 2020.

For example, many universities adjusted winter vacation schedules to allow students to travel before or after the rush, while some employers encouraged staff members to stay put during the holiday.

In addition, tourism trips, which became increasingly popular before the pandemic, have declined significantly.