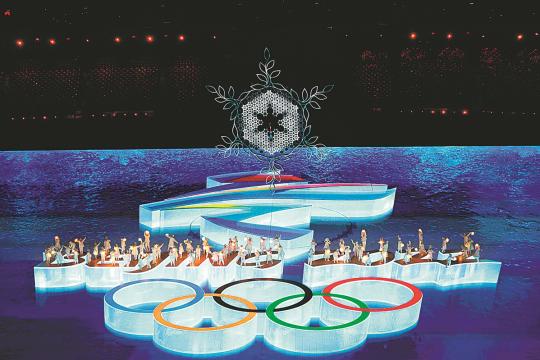 The giant LED screen during the Lighting the Emblem performance at the closing ceremony of the 2022 Beijing Winter Olympics on Sunday. (Photo by FENG YONGBIN/CHINA DAILY)

From showcasing the roaring current of the Yellow River to drawing a massive Chinese knot on ice, the giant LED screen that staged such scenes during the opening and closing ceremonies of the 2022 Beijing Winter Olympics wowed viewers at home and abroad.

Leyard Optoelectronic, the screen's producer, said the ground screen that served as a stage for the ceremonies was the largest of its kind in the world, measuring 10,552 square meters.

The screen's display resolution could reach 14,880 by 7,248 pixels and 50 frames per second, the company said, significantly higher than the 7,680 by 4,320 resolution of an 8K display, the mass market's cutting-edge display technology.

Ding Mingxiao, the ground screen project manager, told the China Association for Science and Technology that extremely rigorous standards, typically reserved for aerospace engineering, were applied in making the massive screen, ensuring its stability and performance.

The standards included quality control, independent appraisal, meticulous preparation and fail-safe design, Ding said. One example was the use of dual power systems for each of the ground screen's 42,208 panels.

When a panel operated correctly, the two systems each provided 50 percent of the power. However, if one power system failed, the other would provide 100 percent of the electricity.

The panels also had to be able to resist cold temperatures, water, scratches and heavy weights. The engineers even built a dedicated cloud system to monitor panel temperature, humidity, voltage and other parameters so that malfunctions could be pinpointed.

Jin Lei, another project manager, said the 42,208 panels looked like a giant jigsaw puzzle in the center of the Beijing National Stadium, also known as the Bird's Nest.

"It was a sight to behold and we could barely contain our excitement," he said.

After the screen was completed, engineers spent four months calibrating the system before this month's opening ceremony to ensure nothing could jeopardize the event.

Wang Mengxue, one of the engineers involved in the maintenance of the ground screen, said the work was demanding and meticulous.

"The only thought in our mind was to shoulder our duty and make our country proud," she said. "We were honored to be part of the process, and this experience will be remembered fondly."