Beijing says farewell to Games with nod to tradition 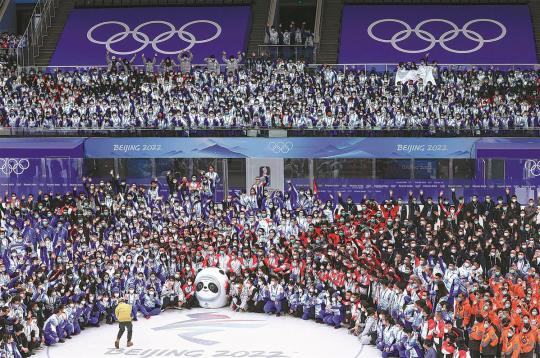 Volunteers and staff workers at the Beijing 2022 Winter Olympics pose on Monday for a group photo at the National Stadium. The closing ceremony of the Games was held at the venue on Sunday night. (HEI JIANJUN/FOR CHINA DAILY)

The grand ceremony held on Sunday night in Beijing to mark the closing of the 2022 Winter Olympic Games put an emphasis, much like the opening ceremony on Feb 4, on athletes, children, Chinese tradition and ordinary people.

The ceremony at the National Stadium, also known as the Bird's Nest, began with children dancing while holding snowflake-shaped lanterns. Accompanied by adult performers, they rode in 12 carts shaped like ice-skating boots and inspired by the 12 animal signs of the Chinese zodiac system.

A traditional "Chinese knot" pattern appeared over the stadium before athletes entered the venue to Beethoven's Ode to Joy. The giant red Chinese knot was projected digitally into the sky, symbolizing not only the connection of China with the world, but also the Olympic spirit of togetherness.

As another nod to Chinese history and tradition, the stage, which was filled with LED screens, displayed visual images of the weeping willow, which symbolizes bidding farewell. Eighty performers interacted beautifully with the imagery of the willow, accompanied by music based on the popular Chinese song Song Bie ("farewell"). The song was adapted from Dreaming of Home and Mother, which was composed by John Pond Ordway in the 19th century, with lyrics written by Li Shutong (1880-1942).

The Chinese character for the willow tree is liu, which refers to the sorrow of separation.

According to Huang Hui, a director and member of the creative team behind the closing ceremony, the idea of using willow to say goodbye was inspired by Chinese tradition. In ancient China, when two friends parted, the one who was leaving would receive a willow twig as a gift, indicating that it was time to depart.

"We want to tell a story about parting in a Chinese way," Huang said in an interview with Beijing Daily.

Also during the closing ceremony, some of the great moments of the preceding 16 days of the 2022 Winter Olympic Games were highlighted through videos. The team efforts during the Games by ordinary people, such as 19,000 volunteers, were also celebrated, with representatives invited to stand on the center of the stage.

A choir of 44 children from a mountainous county in Hebei province who sang the Olympic Anthem in Greek during the Games' opening ceremony performed the same song during the closing ceremony.

Beijing is the first city in the world to host both summer and winter Olympic Games. Chinese film director Zhang Yimou became the world's first director in charge of the opening and closing ceremonies of two different Olympic Games.

"It feels like traveling backward in time here at the Bird's Nest. From 2008 to 2022, time files," Zhang said on the Chinese social media platform Zhi Hu after Sunday's closing ceremony.

"Over the past 14 years, I've changed a lot, just like our country. We came together along with people from around the world with simplified ceremonies because we are much more confident, compared with 2008. This time, we are relaxed and we set a romantic tone."

Zhang said that he met a staff member who had served as a volunteer during the 2008 Beijing Olympic Games. This time, he was the leader of the volunteers.

"He told me that he came here again, and I said to him that 'you grew up'," Zhang said.

"Without the development of the country, we cannot hold two different Olympic Games and I wouldn't be able to direct the ceremonies. I am so lucky," he added.