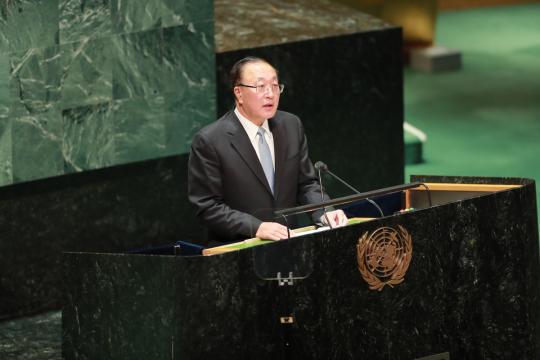 China's ambassador to the United Nations on Wednesday firmly opposed any attempt to destabilize Kazakhstan and called for practicing true multilateralism and opposing group politics.

As a regional security organization with important influence, the Collective Security Treaty Organization (CSTO) "has played an important role in safeguarding the independence, sovereignty and territorial integrity of its member states, and preventing and responding to new threats and challenges to regional security," Zhang Jun, China's permanent representative to the UN, said at a Security Council open debate on cooperation between the UN and the CSTO.

"China appreciates the cooperation between the CSTO and the UN in the fields of counterterrorism, combating drug smuggling, organized crime and peacekeeping in recent years," said Zhang.

"China supports the CSTO to continue to play to its own advantages and form a synergy with the UN's efforts to maintain international peace and security," the envoy said.

Zhang pointed out that the large-scale violence against the government in Kazakhstan has caused heavy casualties and property losses, and "China is highly concerned about this," he said. "China supports all measures that are conducive to the restoration of stability in the domestic situation in Kazakhstan."

At the request of the Kazakh government, the CSTO went to Kazakhstan to assist in maintaining domestic order, and "at a critical moment, it played an active role in stabilizing the situation in Kazakhstan", Zhang emphasized.

"We believe that the Kazakh authorities can properly solve the problem and maintain the country's stable development. We also hope that the international community can fully respect Kazakhstan's sovereignty and play a constructive role in maintaining stability and development of Kazakhstan and the region," he continued.

Faced with a complex and severe situation, Zhang said the international community "needs to practice genuine multilateralism and oppose bloc politics and cliques; it needs to strengthen solidarity and cooperation, and oppose confrontation and pressure; it needs equality and mutual trust, and opposes using power to bully others," "Only by grasping the right direction can we join hands to achieve common prosperity and uphold fairness and justice," he said.

The envoy pointed out that China and Russia and other members of the CSTO are important partners with a long-term friendship and mutual trust. Under the new situation, "China is willing to work with the member states of the CSTO to deepen cooperation in the 'Belt and Road', economy, trade, security, people-to-people and cultural engagement and other fields, improve the level of connectivity and promote the process of economic integration," he said.

"We will discuss taking effective measures to fully unleash the cooperation potential of mechanisms such as the CSTO and the Shanghai Cooperation Organization (SCO), jointly combat terrorism, promote lasting peace and common prosperity in the region, and build a closer community with a shared future," said Zhang.

"China will also strengthen foreign policy communication and coordination with the member states of the CSTO and conduct close cooperation on multilateral platforms such as the UN, to make positive contributions to maintaining the international order based on international law and the central coordination role of the UN in international affairs," Zhang said.

The CSTO originated from the Collective Security Treaty, which was signed on May 15, 1992, following the breakup of the Soviet Union. According to the CSTO charter, its goals are "strengthening of peace, international and regional security and stability, protection of independence on a collective basis, territorial integrity and sovereignty of the member states".