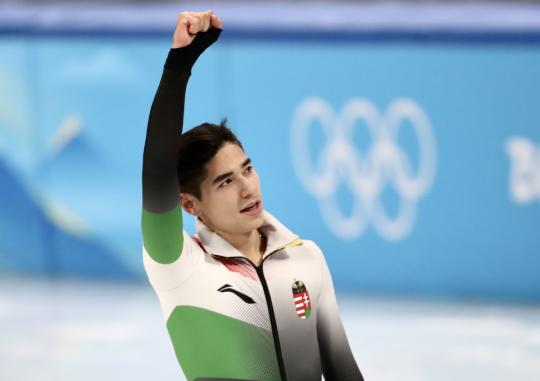 Although many different languages can be heard among competitors at the Beijing 2022 Winter Olympics, a Mandarin dialect spoken in Northeast China is attracting attention and delighting many fans.

The dialect is mainly spoken in the three northeastern provinces of Liaoning, Jilin and Heilongjiang, and as many Chinese winter athletes were either born or train in the region, it is widely spoken among them.

The dialect, which can confuse speakers of standard Mandarin, uses idiomatic expressions and is known for humorous phrases. Sometimes this causes translation problems.

On Saturday, after speed skater Gao Tingyu claimed gold in the men's 500-meter speed skating event, he was asked by a reporter at a news conference to describe his personality. The 24-year-old from Yichun, Heilongjiang, replied in a self-deprecating way that he was "gelu", which in the northeastern dialect means "offbeat".

The word confused the interpreter who did not understand the dialect and translated the phrase into English as "I think I'm quite… glue".

Gao's dialect soon made him a trending topic online, with many netizens amused by it and calling for an interpreter with greater proficiency in the northeastern dialect.

The dialect was also noticed at the 2018 Pyeongchang Winter Olympic Games. Short track speed skaters Sandor Liu Shaolin and his brother Liu Shaoang, representing Hungary, told media that they train in Changchun, Jilin, their coach is Chinese and they are fluent in the dialect. The brothers have a Chinese father and Hungarian mother.

Sidney K Chu, a short track speed skater from the Hong Kong Special Administrative Region, did not make the men's 500m final after his heat on Friday. However, he is popular with fans for the way he switched seamlessly from Cantonese to the northeastern dialect in interviews.

Hong Kong lacks a standard speed skating venue, and Chu and his teammates have trained in Jilin for many years and communicate frequently with coaches and athletes in the dialect. "Northeastern dialect is kind of like the official language of our short track speed skating," he said.

Wang Meng, a four-time Olympic champion in short track speed skating from Heilongjiang, who is a commentator for the Games, joked, "There are three official languages for the Winter Olympics: English, Mandarin and the northeastern dialect".

Northeast China has given birth to many outstanding winter sports athletes due to its abundance of snow and ice.

Harbin, capital of Heilongjiang, hosted the country's first national ice games in 1953. The province is also one of the first in China to have speed skating and ice hockey teams. To date, athletes from Qitaihe in Heilongjiang have claimed seven of the country's 16 Winter Olympics gold medals.

At the Beijing Winter Olympics, 100 of the 176 Chinese athletes hail from Northeast China. Ten athletes in China's short track speed skating team are from the region, according to official data.

However, as the Beijing 2022 Games have attracted more people to winter sports, the country is likely to see more elite winter athletes from different areas of China in the future.

The Chinese delegation at these Games already has more athletes from different parts of China than at any other Winter Olympics.

Qi Guangpu, who won silver in the freestyle skiing mixed team event, is from Jiangsu province, and Yan Wengang, who claimed bronze in the men's skeleton event, is from Tianjin.

The delegation also has six athletes from the Xinjiang Uygur autonomous region, including cross-country skier Dinigeer Yilamujiang, who was one of the two athletes who lit the Olympic cauldron at the opening ceremony.