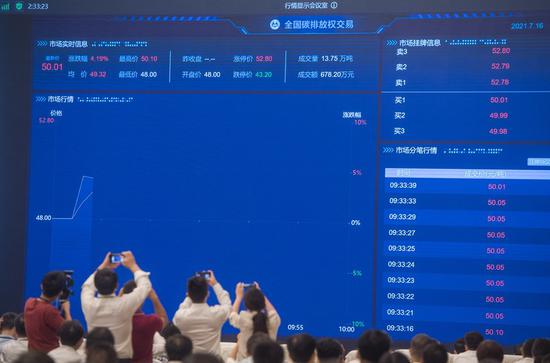 China's national carbon market has wrapped up its first compliance period with a steady rise in market activity, said the Ministry of Ecology and Environment on Monday.

As of December 31, the carbon market reported a total turnover of 7.66 billion yuan (about 1.21 billion U.S. dollars) and a trading volume of 179 million tonnes since it started operation last July, said Liu Youbin, a ministry spokesperson.

The average carbon quota price at the market was 42.85 yuan per tonne, while the compliance rate was 99.5 percent, he told the press.

"In general, the basic framework of the national carbon market has taken shape," said Liu. He noted that enterprises are showing more awareness and capability of emission reduction. The market has also started to play its role in promoting emission cuts and a low-carbon transition.

Carbon emitters from other sectors will gradually be included in the market, Liu said last month.

China has announced that it will strive to peak carbon dioxide emissions by 2030 and achieve carbon neutrality by 2060.