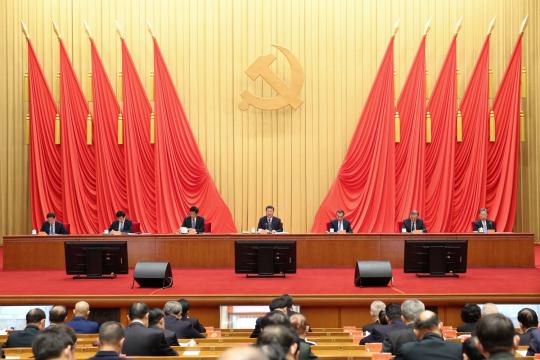 After a busy year of fighting corruption in various aspects, such as in the financial and poverty alleviation sectors, the top discipline watchdog of the Communist Party of China has pledged to maintain a high level of pressure on all sorts of disciplinary violations and graft crimes to ensure a clean Party.

A communique adopted at the sixth plenary session of the 19th Central Commission for Discipline Inspection of the CPC, which was held in Beijing from Tuesday to Thursday, rounded up the achievements of discipline authorities in 2021 and set out clear requirements for key tasks this year.

The meeting also approved a work report by Zhao Leji, a member of the Standing Committee of the Political Bureau of the CPC Central Committee and secretary of the Central Commission for Discipline Inspection of the CPC.

In 2022, the CPC will convene its 20th National Congress, which is a major event in the political life of the Party and the country, the communique said.

Discipline inspection commissions and supervision agencies should play a better role in enforcing oversight of the implementation of decisions, particularly on the major tasks of fully deepening reform and opening-up, realizing common prosperity, improving self-reliance in science and technology and defusing major risks, the communique said.

The document stressed the importance of putting the spotlight on leading officials, also known as the "key few". It called for strengthened oversight of officials in command and leadership teams, and said no mercy will be shown to those who run or are engaged in political factions, cliques or interest groups within the Party.

Election by bribery and breaches of electoral discipline will be punished harshly, according to the communique.

It called for strictly educating, managing and supervising young officials, as well as more efforts to tackle problems related to the disorderly expansion of capital and monopolies in the internet platform sector.

The communique urged strict financial discipline, and to promote the prevention and resolution of local government hidden debt risks, as well as resolutely investigate and deal with corruption in infrastructure construction, the financial sector and State-owned enterprises.

Furthermore, the authorities will explore setting up a blacklist of people engaged in bribery, and will continue with the Sky Net anti-corruption operation, which was launched in 2014, to hunt corrupt officials who have fled overseas, said the communique.