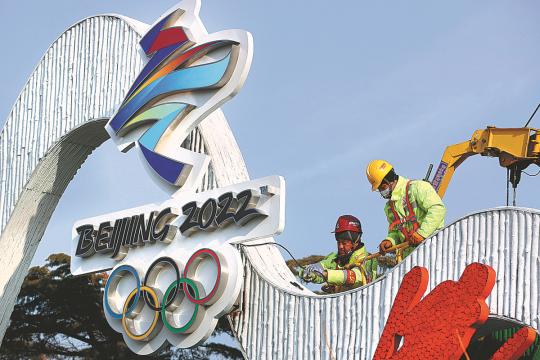 As host of the 2022 Winter Olympic Games, Beijing announced multiple measures on Friday, such as encouraging companies to adopt flexible working hours and remote working, to ensure smooth traffic conditions during the upcoming event.

Wu Shijiang, deputy head of the Beijing Municipal Commission of Transport, said at a news conference on Friday that the authority will take measures to adjust traffic volume during the event period to optimize traffic conditions and bring as few disruptions as possible.

"The local governments of Beijing's districts where most venues are located should take the initiative to organize local units to actively implement a flexible working mechanism," Wu said. "Meanwhile, we recommend all residents use green transportation instead of private cars."

In addition, to minimize any air pollution, a stricter traffic restriction policy－based on odd-even license plate numbers－will be in place.

From Jan 21 to March 16, various new traffic measures will be utilized to support the Games.

"There will be many traffic challenges during the Games period, such as residents being encouraged to 'stay put' during Chinese Lunar New Year to avoid potential risks of spreading COVID-19; students choosing to spend their winter break in Beijing; and traffic burdens when classes resume," Wu said.

"We have conducted detailed analyses and predictions for traffic flows during the Games. We expect that in the northern and western parts of the city, where most venues are located, there may be some traffic congestion during events.

"Therefore, based on previous experience during the hosting of the 2008 Summer Games, we will carry out temporary traffic management measures to ensure smooth transportation, such as setting up Olympic lanes."

The Olympic lanes, which cover all main roads and expressways between the airport and Games venues, will be clearly marked with Beijing 2022 logos and will not be accessible by non-Olympic public and private vehicles starting from Jan 21.

Zheng Kai, a technology employee in Beijing, said it's everyone's duty to contribute to the Winter Olympics, and he will take the subway as much as possible during the Games instead of driving.

"I'm looking forward to the Winter Olympics very much and hope the athletes can enjoy the Games and their time in Beijing," Zheng said.