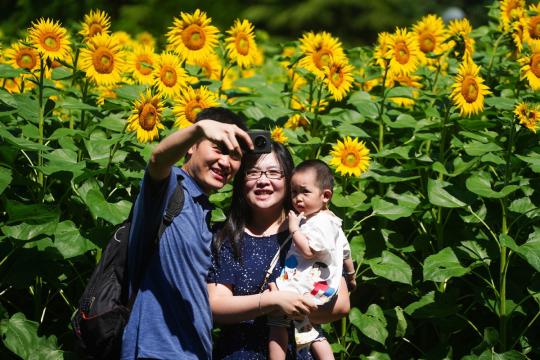 A family takes photos against a backdrop of blooming sunflowers at the Olympic Forest Park in Beijing, on July 4, 2021. (Photo/Xinhua)

China's unique path of human rights development has much to offer to the world, Chinese experts said on Friday at a conference on the country's human rights concepts and practices in the new era.

The All-China Journalists Association held a conference on Friday in which Chinese scholars introduced a book with extracts from President Xi Jinping's discourses on respecting and protecting human rights, which was published in December.

Xu Xianchun, deputy director of the First Research Department, Institute of Party History and Literature of the Communist Party of China Central Committee, said the book is of great significance in promoting a more just, reasonable and inclusive global human rights governance.

China has contributed its wisdom, solutions and strengths to advancing human rights progress in the world, he said, adding that the centennial struggle of the CPC has fundamentally changed the destiny of Chinese people and enriched the diversity of human civilizations.

Wang Xigen, dean of the school of law at Huazhong University of Science and Technology in Wuhan, Hubei province, said China has a lot of experience to share with the world, including the inclusion of respect for and protection of human rights in the country's Constitution as a basic principle of governance, and the pursuit of a people-centered development philosophy.

China insists on a development-based approach to human rights that requires solving key problems that seriously restrict human rights, including absolute poverty and inequitable development, he said, which is important to developing economies that account for 80 percent of the world's population.

When asked about a recent incident involving a miscarriage during a COVID-19 lockdown in Xi'an, Shaanxi province, in which a pregnant woman was refused admittance to Xi'an Gaoxin Hospital because her nucleic acid test result was expired, Wang said that as soon as the problem arose, authorities responded seriously to resolve it.

Measures including launching a special channel for urgent patients, punishing people responsible and suspending operation of the hospital for rectification have all been promptly taken, he added.

Meng Qingtao, a professor of human rights studies at Southwest University of Political Science and Law, said there is always some deviation of policy implementation for every country at the grassroots level, and China is learning from the experiences of other countries to improve, in accordance with the nation's own conditions.

In the Xinjiang Uygur autonomous region, the number of religious facilities has been increasing with funds invested by the country to support them, he said.