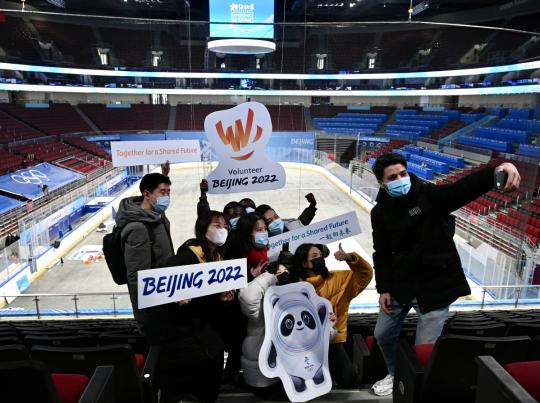 Student volunteers from nine countries pose for a photo at the Wukesong Sports Center in Beijing. (Photo:chinadaily.com.cn/Wei Xiaohao)

The world expects all members of the United Nations to fulfill their obligations and observe the truce resolution adopted for the Beijing 2022 Winter Olympics, Foreign Ministry spokesman Wang Wenbin said at a daily news conference on Friday.

Wang made the remark after a reporter sought his comments about the United States and its allies possibly continuing their military drills near China about the time the Games are open.

The resolution, adopted by the 76th session of the UN General Assembly, reflects the consensus of all UN members, Wang said.

The resolution, co-sponsored by 173 countries and adopted on Dec 2, asks all countries to observe the Olympic truce and stop hostile activities seven days before the Winter Olympic Games through to seven days after the end of the Winter Paralympic Games, according to Wang.

The Beijing 2022 Winter Olympics is a grand occasion of sports, the spokesman said, adding that all countries should observe the Olympic motto of "Faster, Higher, Stronger－Together" and bring hope for humanity to overcome difficulties together through a successful Winter Olympics.

China also welcomed UN Secretary-General Antonio Guterres to attend the opening of the Beijing 2022 Winter Olympics, Wang said, after Guterres said on Thursday that he will attend.

Guterres said that the Olympics is "an extremely important event... that symbolizes the role of sports in bringing people together and in promoting peace", according to a video clip published by China Global Television Network.

"It is in this strict context and without any political dimension that I intend to be present in the opening－with this message that Olympic Games must be an instrument for peace in the world," Guterres said.

Countries and international organizations including the UN and the International Olympic Committee have expressed their support for the Beijing Winter Olympics and their opposition to politicizing sport, Wang said, adding that China is confident in working with all parties to implement the Olympic spirit of "Together" and host "a grand Olympic event that is streamlined, safe and splendid".