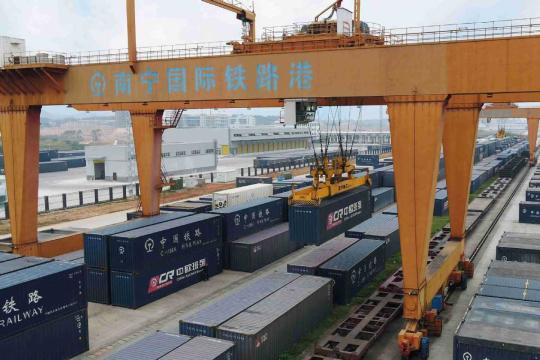 The RCEP－the world's largest free trade deal－came into force on Jan 1. The X9101 train carried electronics, daily necessities and chemical products worth more than $10 million. It was expected to reach Hanoi in 28 hours after leaving Nanning, the regional capital of Guangxi.

Also on Jan 1, some 5.6 metric tons of imported reflective films from Japan arrived at a port in Shenzhen, Guangdong province. The reflective films will be used for the production of mobile phones, digital cameras and other electronic products.

The implementation of the RCEP agreement has helped lower the cost of customs duties by 6,000 yuan ($942.6) for the films worth 1.33 million yuan, said Chen Guogang, a director from a Shenzhen-based supply chain service provider called Jiuli.

The RCEP was signed on Nov 15,2020, by 15 Asia-Pacific countries－the 10 members of the Association of Southeast Asian Nations and China, Japan, the Republic of Korea, Australia and New Zealand－after eight years of negotiations that started in 2012.

With optimized trade rules among the signatories, streamlined procedures and wider opening-up in the sectors of services trade and investment, it will bring tangible benefits to the companies of all member countries.

"The company and overseas partners both benefit a lot from following the trend of regional economic integration in East Asia, and I believe the RCEP will further promote this process," said Li Dongchun, a manager of Guangxi Liugong Machinery Co Ltd, a machinery manufacturer based in Liuzhou, Guangxi Zhuang autonomous region.

"With the RCEP in effect, tariffs will be gradually reduced to zero. We will further expand our overseas market," said Li Yuhong, a manager of the company that exports products to ASEAN countries, Japan and the ROK.

Experts said that under the RCEP, a higher level of opening-up, a larger market and better policies will bring new development opportunities and potential, and this will inject sustained momentum into the recovery of the global economy.