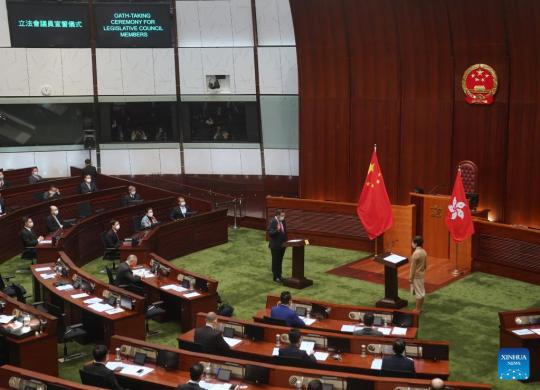 The Hong Kong government will join hands with the new Legislative Council (LegCo) to solve critical social problems through legislation, Chief Executive Carrie Lam Cheng Yuet-ngor said on Tuesday, a day after 90 lawmakers of the seventh LegCo were sworn into office, marking the LegCo's new term.

Speaking before the Tuesday Executive Council meeting, Lam said the legislative work remains heavy this year, adding that dozens of legislative proposals mentioned in her latest Policy Address will be successively tabled to the new LegCo for consideration.

She continued that many legislations passed last year will go into force this year, including the subdivided unit rent control regulation, which will take effect on Jan 22. From this year, statutory holidays will also be increased to be on a par with general holidays.